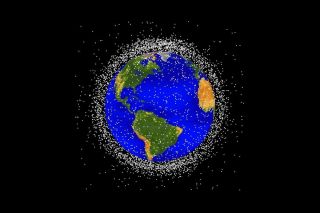 The world is anticipating China's Tiangong-1 space lab's blazing reentry to Earth's atmosphere sometime within the next week or so, with some debris possibly surviving to reach the planet's surface.

However, it's not the first spacecraft to shed bits of flaming flotsam onto Earth during its final, fiery huzzah, and it won't be the last. About half a million pieces of so-called space junk — human-made and naturally occurring objects that can reach speeds of 17,500 mph (28,164 km/h) — are being monitored as they orbit Earth, NASA reported in 2013.

"On average, a total of between 200 to 400 tracked objects enter Earth's atmosphere every year," according to NESDIS. The reason why you aren't constantly ducking flaming particles is because many of them don't survive the brutal r-entry, and instead burn up long before they hit the ground. And Earth is a big place, with 70 percent of its surface covered by water. If a fiery bit of space debris falls into the open ocean, it'll sizzle and sink without anyone ever knowing it was there.

Of the 500,000 estimated pieces of debris orbiting Earth, about 20,000 of them are bigger than a softball. Those larger chunks of junk — along with an additional 30,000 smaller objects— are tracked by the U.S. Department of Defense in collaboration with NASA. Of those 50,000 objects, about 1,000 represent fragments from spacecraft, according to NESDIS.

In an animation created by NASA and shared to YouTube in 2014, a view of Earth from space shows a world surrounded by a moving cloud of human-made debris, which extends outward to form a loose disk around the planet.

But while space junk poses a serious threat to active satellites, space telescopes and the International Space Station, it is rarely something that people on the ground have to worry about, NESDIS representatives said in the blog post.

Chances are that most of Tiangong-1 will simply burn up on reentry. But even if it doesn't, you can at least relax about getting hit on the head by a falling fragment — the odds of actually being struck by broken bits of the space lab are approximately 1 in 300 trillion, a probability about 10 million times smaller than the annual odds of being struck by lightning, according to the European Space Agency.