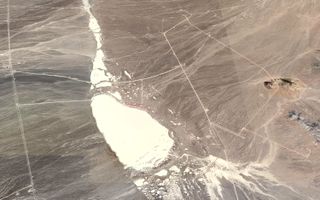 The experimental military base Tonopah Test Range in southwestern Nevada is shown in this 2017 Google Earth view, before a recent update.
(Image: © Google Earth)

Satellite imagery of an experimental military base that was missing from Google Maps for years is now available … but you'll have to go to New York City to see it.

Engineer Dhruv Mehrotra, a resident at the technology and art nonprofit Eyebeam, and writer Brendan Byrne leased the swatch of satellite imagery from the company Apollo Mapping for $1,984.50, after noticing that Google Maps hadn't updated an area over the Tonopah Test Range in southwestern Nevada for eight years.

The leased imagery can be shown only to people within Mehrotra and Byrne's "company," so the pair hosted an event yesterday (Oct. 25) called "Internal Use Only" to showcase the bird's-eye view of the experimental military installment. Visitors had to sign paperwork declaring themselves temporary employees of Eyebeam in order to legally see the satellite shot. [15 Secretive Places You Can Now See on Google Earth (And 3 You Can't)]

Mehrotra and Byrne originally suspected government censorship when they learned that users of Google Maps were seeing 8-year-old imagery when they scrolled over Tonopah. According to a Google spokesperson who contacted Motherboard after Mehrotra and Byrne published their article, there was no censorship involved, but rather uninterest. The company licenses its imagery from third- party providers, and updates based on where users tend to browse.) The company has since updated Maps, and the aerial view of the test zone now dates to October 2017, they wrote on Motherboard. According to the Google Earth blog, most of the country's satellite imagery is updated roughly every three years, with the area in Nevada containing Tonopah Test Range an exception that "seems to have been missed."

The pair's project highlights the quilted nature of Google Maps. Some of the mapping program's imagery is aerial photography, taken from planes or helicopters, Mehrotra and Byrne wrote. Over military bases, where airspace is tightly controlled, Google tends to get imagery from private satellite companies instead.

The Tonopah Test Range is about 70 miles (110 kilometers) from Area 51, another military installment famous for UFO sightings and alien myths. According to Sandia National Laboratories, the range is used to test a variety of weapons and planes. Tonopah, according to Jalopnik, was where the slim-winged F-117, the first "stealth" aircraft in the U.S. military, was developed.