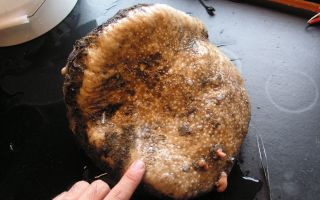 The modern-day demosponge species Geodia phlegraei makes a steroid that has also been found in 635-million-year-old rocks around the world. Scientists believe this steroid compound, known as 26-mes, represents evidence that sponges are the oldest known animal lifeforms on Earth.
(Image: © Paco Cárdenas)

When did animal life first emerge on Earth?

The long-buried answer to that question lies not in fossilized shells or bones, but in the preserved chemicals from animals' bodies that have been found in ancient rocks.

Ancient chemical traces, known as biomarkers, have revealed that sponges existed at least 635 million years ago and perhaps as far back as 660 million years ago, making them the oldest known form of animal life, a new study finds.

That same sponge lineage — a group known as demosponges — is still around today. And modern demosponges produce the same chemical that their ancient relatives left behind: a steroid compound that only these sponges are thought to produce, according to the research. [In Images: The Oldest Fossils on Earth]

Some early animal life, such as Dickinsonia, which lived 558 million years ago, left behind imprints of their bodies in rock. But the soft bodies of ancient animals typically don't fossilize at all. When searching for evidence of these elusive creatures, researchers turn to biomarkers — in this case, molecules of the steroid 26-methylstigmastane (26-mes), study co-author Gordon Love, a professor in the Department of Earth Sciences at the University of California Riverside, told Live Science.

In 2009, Love and his colleagues had detected another ancient compound called 24-isopropylcholestane (24-ipc), which was also thought to be a biomarker of sponges, in 635-million-year-old rocks from the Arabian Peninsula. But it was hard to say for sure if sponges were the source, since some types of algae also produce 24-ipc, Love said.

On the other hand, the steroid 26-mes is associated only with modern demosponges, according to the study.

"So far, it's not shown up in any lineages other than demosponges," Love said.

The team analyzed molecules found in rocks from around the world. They discovered 26-mes molecules alongside traces of 24-ipc, locked into rocks and oils excavated from India, eastern Siberia and Oman, the researchers reported. Once they'd found the steroid and confirmed that it didn't drift into the sediment from younger rocks, they knew that sponges were inhabiting Earth's oceans at least 635 million years ago, according to the study.

And yet, some lingering questions remain about using biomarkers to identify ancient life, said Jonathan Antcliffe, a senior researcher with the Department of Zoology at the University of Oxford.

Antcliffe, who was not involved in the study, told Live Science in an email that ascribing biomarkers to specific animals can be problematic. Why? We simply don't know enough about biochemical production in extinct and living organisms, making it next to impossible to check all possible sources for a match to a specific chemical, Antcliffe said in the email.

In other words, even though 26-mes has only been found in modern demosponges, that doesn't rule out the possibility that other extinct animals might have produced it as well, he said.

In fact, 26-mes in modern sponges could even originate in another organism, such as symbiotic bacteria, "or something that the sponge had eaten," Antcliffe said.

Another missing puzzle piece is the still-unknown purpose of the steroid in modern sponges and their ancient relatives, Love told Live Science. Maybe the steroid allowed early sponges to engulf and safely harness nutrient-extracting symbiotic microbes, or perhaps it served as a chemical defense against predators, "but to be fair, no one knows for sure," Love said.

It is also unknown what other forms of life shared early sponges' watery homes. But even though sponges are the oldest form of animal life identified to date, they likely weren't alone, and probably shared their ocean habitats with plenty of company, Love said.

"On the seafloor of the continental shelf, some environments must have been ecologically abundant at this stage," he explained. "What the drivers for this might be — in terms of climate, tectonic events, glaciations — that's what we're trying to unravel next."

The findings were published online Oct. 15 in the journal Nature.