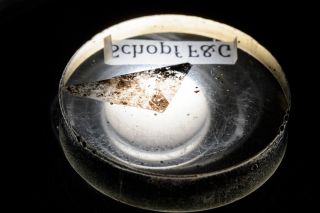 An epoxy mount containing a sliver of a nearly 3.5 billion-year-old rock from the Apex chert deposit in Western Australia is pictured at the Wisconsin Secondary Ion Mass Spectrometer Lab (WiscSIMS) in Weeks Hall.
(Image: © William Graf/University of Wisconsin-Madison)

Ancient, preserved microbes that are too small to be seen with the naked eye, dating to billions of years ago, may represent the oldest known evidence of life on Earth, according to a new study.

First unearthed in western Australia in 1982 and described in 1993, these microfossils are so tiny that eight of them lined up one after another would span the width of a human hair. The researchers who discovered the fossils initially identified them as biological, but other scientists argued that it was impossible to say for sure, proposing that the so-called "fossils" were more likely odd-looking minerals.

However, when the authors of the new study used a novel method to inspect the delicate fossils on a molecular level, they detected certain carbon signatures indicating that the fossils were organic in origin after all. Though the fossils were estimated to be about 3.5 billion years old, the diversity of microbes in the group suggested that life probably emerged on Earth even earlier than that, the study authors reported. [In Images: The Oldest Fossils on Earth]

But not everyone may agree that these fossils represent the oldest life on Earth. Some experts have indicated that there are other samples that could be even older than the Australian microfossils, while other researchers have cast doubt on whether these sediments house traces of life at all, suggesting that chemical markers thought to represent biological evidence were the result of geothermal activity.

Compared to fossils of extinct vertebrates, microbial fossils may not seem like much to look at, even when they're highly magnified. Certain large fossil specimens are beautifully detailed in their preservation, retaining impressions of ancient animals' skin or feathers. Others astonish with their sheer size, such as the giant sauropod dinosaurs' massive femurs, which can be taller than a human adult.

But microbe fossils, though neither structurally complex nor large, are unrivaled when it comes to age. The first life on Earth was microbial, and fossils from this time offer a tantalizing glimpse of the forms from which all creatures — living and extinct — evolved over billions of years.

In recent years, other studies have reported microfossils holding evidence of ancient microbial life, such as tiny hematite tubes embedded in iron-rich volcanic rock in Quebec, which may have housed microbes that lived between 3.77 billion and 4.29 billion years ago. Another study described cone-like structures detected in rocks in southwestern Greenland, which could represent sediments surrounding fossilized microbial colonies that lived 3.7 billion years ago.

Both of those discoveries indicate possible evidence of life that would be older than the microbes evaluated in the new study. However, the new investigation is the first to examine and describe individual, fossilized microbes, finding "both the morphology and geochemical signature of life" in samples that are this old, study co-author John W. Valley, a professor of geoscience at the University of Wisconsin-Madison, told Live Science in an email.

But definitive answers can be elusive when one is peering backward in time to Earth's distant past, particularly in the search for the origins of life on our planet. Billions of years of geologic changes leave behind chemical traces in rocks that often resemble signatures of biological remains, according to previous studies.

Though clearly ancient, this group of microbe fossils was difficult to analyze when it was first discovered, according to study co-author J. William Schopf, a professor of paleobiology at the University of California, Los Angeles, and one of the researchers who found and described the fossils decades ago. In fact, Schopf referred to them as "tiny bits and pieces" that were "abundant" but also "charred, shredded, overly cooked" in his book "Cradle of Life: The Discovery of Earth's Earliest Fossils" (Princeton University Press, 1999).

For the new study, Schopf and his colleagues examined 11 specimens of microscopic fossils using a highly sensitive technique that was unavailable when the microbes were first described: secondary ion mass spectrometry (SIMS). This procedure analyzes the composition of a solid surface by bombarding it with ions, and then collecting and evaluating the ions that are ejected from the scanned object.

To do that, the researchers needed to expose the fossils' surface for the scanner, so they meticulously ground down the rock that held the fossils, micrometer by micrometer, the scientists explained in a statement.

After they scanned the fossils, they isolated and compared carbon isotopes — forms of carbon with the same number of protons but different numbers of neutrons. They found that the ratios of two particular isotopes "are characteristic of biology and metabolic function," Valley said in the statement.

"We show that taxa identified by morphology correlate to carbon isotope ratio. It took us 10 years to develop the ability to make these measurements accurately," he told Live Science.

As for other researchers that have described even older evidence of microbial organisms, while they may have presented ancient features that were, in fact, consistent with signs of life, their proof was incomplete, Valley explained.

"Some features have morphology but no chemistry. Others have appropriate carbon isotope ratios but the morphology was destroyed by high temperature metamorphism," he said.

The study authors further identified the microbes as a diverse group, which included some microbes that were methane producers, some that would have consumed methane and others that would have relied on the sun to produce energy.

The differentiation between these microbes was especially noteworthy, because it suggests that life had already been on Earth long enough for it to begin to diversify and specialize, the study authors reported. While it's impossible to say when life made its first appearance on the planet, these microbes hint that very primitive microbial life could have emerged even in Earth's infancy.

"We have no direct evidence that life existed 4.3 billion years ago but there is no reason why it couldn't have," Valley said in the statement.

"This is something we all would like to find out," he added.

The findings were published online Dec. 18 in the journal Proceedings of the National Academy of Sciences.