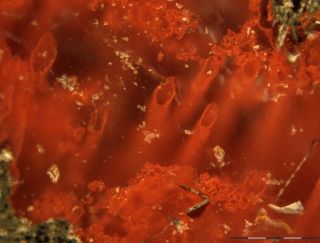 Scientists recently found evidence of ancient lifeforms in rocks in Canada. Within these fossils were tiny tubes of a mineral called hematite, a form of iron. The researchers believe these tubes are relics of an ancient form of microbial life that lived near hydrothermal vents.
(Image: © Matthew Dodd)

Ancient traces of microbial life that are between 3.77 billion and 4.29 billion years old might have been unearthed in a rocky outcropping in Canada, a new study suggests. However, some scientists are casting doubt on what the findings truly mean.

If the new microfossils truly are evidence of primordial life that once sprang up in ancient hydrothermal vents, it suggests that life began on Earth soon after the planet coalesced, the study authors said.

"We can say life managed to emerge on Earth very rapidly almost soon after the oceans had condensed on the surface of the Earth 4.4 billion years ago," said study lead author Matthew Dodd, a biogeochemistry graduate student at the University College London. "What this means is that life may not be such a difficult process to start once we have the right conditions and ingredients."

However, not everyone is convinced: One scientist says there's no way to say for sure that these traces are evidence of life — or that they are truly ancient. [In Images: The Oldest Fossils on Earth]

There's no doubt that life has clung to our watery planet for much of its 4.5-billion-year history, but exactly when that life first emerged has been hotly debated. Scientists have found chemical signatures associated with life in 4.1-billion-year-old zircons from Australia. Filamentous structures threading through rocks in Australia were initially identified as 3.5-billion-year-old microbial mats. And fossils in Greenland contain traces of what might have been primeval cyanobacteria that first emerged 3.7 billion years ago.

The trouble is that it's difficult for scientists to pin down signs of tiny life-forms that lived billions of years ago, when the Earth has gone through so many other changes since then.

For instance, the 3.5-billion-year-old rocks identified in Australia, known as the Apex Chert, were initially touted as tiny microfossils, but a subsequent analysis found that the chemical remains were tied to nonbiological processes from hydrothermal vents, said Kurt Konhauser, a geomicrobiologist at the University of Alberta who was not involved in the new study. Furthermore, the 3.7-billion-year-old fossils found in Greenland could have gotten their intriguing chemical signature from a nonbiological process, according to the new study, which was published today (March 1) in the journal Nature.

In the study, Dodd and his colleagues identified a rocky outcropping of primitive ocean crust in Quebec, Canada, made up mostly of volcanic lava rock. Sprinkled within this rock are ancient forms of zircon that are at least 3.7 billion years old — a finding that suggests the rock formation itself has ancient origins.

Inside some of the deeper portions of this rock, which likely have not been subjected to more recent effects, the researchers found tiny, wavy filaments and tube-like structures several times thinner than a hair.

"You're not going to see these without a microscope," Dodd told Live Science.

These structures resemble later microbial fossils that have been unearthed in Lokken, Norway, and California. These later fossils, which come from hydrothermal vents, are just 180 million and 450 million years old, respectively.

The team also found chemical signatures associated with life, such as higher ratios of lighter versus heavier isotopes (or versions) of carbon. [Video: Ancient Signs of Life Found in Canadian Rocks]

"Life prefers to use the lighter isotopes to build its molecules," Dodd said.

In addition, the team found distinctive "rosettes" of carbonate, along with a chemical called apatite interwoven through them. Apatite forms when phosphorus, an element needed by all life-forms, decays and combines with other rocks in the environment.

Tiny granules that might have formed when these organic life-forms decayed and reacted with seafloor minerals also point to life, as similar granules are found around more modern fossils, such as those of ammonites, Dodd said.

Finally, the team found forms of iron in the rocks that could have been formed by iron-oxidizing, hydrothermal vent bacteria, the researchers reported. The team also ruled out several alternative explanations, such as the wavy structures forming through rock stretching.

Possible, but not definitive

The researchers have provided a lot of solid evidence to support their claim for ancient life, Konhauser said.

"They've gone a lot further than most other papers ever have; but it's not conclusive, and it never will be," Konhauser told Live Science.

The problem is that it's incredibly tricky to show both that the formations are proof of life, and that those traces of life are truly as old as the researchers say they are.

"These rocks are crosscut by lots of different hydrothermal vanes; over 4 billion years, lots of fluids have moved through these rocks," Konhauser said. As such, it's possible to argue that the signs of life may be more recent, even if the rocks themselves are ancient, he added.

The other issue is that the team is arguing that ancient life-forms were oxidizing iron at least 3.8 billion years ago, far below the water's surface, near hydrothermal vents, he said. For microbes to oxidize iron, oxygen must reach lower ocean depths. But most scientists think the deep ocean didn't get oxygen so early on.

In modern times, oxygen reaches the deep ocean in part because cold water from the icy poles forms down-welling currents that carry oxygen deeper, Konhauser said. No one knows whether there were poles at that time and, if there were, how oxygen would have reached the deep ocean, he added. (There are cyanobacteria that can oxidize iron while lying in shallow waters using sunlight, but the new study is claiming that the bacteria came from hydrothermal vents, Konhauser said.)

So, although multiple individual lines of evidence do point to the structures being evidence of life, the problem occurs when they try to weave those pieces of evidence into a complex story, Konhauser said.

"Just because it looks like something, doesn't mean it is," he said.