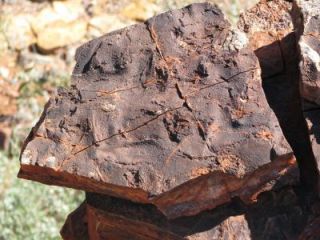 The new fossils, described in the journal Astrobiology, may be among the most ancient fossil life forms ever found.

"This is one of the, or the, oldest fossils ever found. You've got a 3.5-billion-year-old ecosystem," said study co-author Robert Hazen, an earth scientist at the Carnegie Institution for Science in Washington, D.C.

The new find reveals that a scant 1 billion years after Earth's origin, complex microbial communities that clung to sediments along the windswept seashore had already begun harvesting energy from sunlight, rather than the rocks.

Scientists hotly debate how life began on Earth. Though chemical evidence of carbon-based life forms, such as isotopes (or different forms) of carbon, reveal that life existed on early Earth, scientists have discovered a few controversial traces of its existence.

Hazen's colleague, Nora Noffke, a researcher at Old Dominion University in Virginia, was studying ancient rocks at the Dresser Formation in Australia when she spotted some unusual formations.

The region had tens of meters of spots with a rough, wavy texture. To the untrained eye, the texture could have been anything, but Noffke had spent years studying similar formations that were created by ancient and modern microbial communities.

"So many geologists have walked over the same rocks and never noticed anything," Hazen told LiveScience.

The areas had ripple marks going in many different directions, which often form because the microbial mats protect sediments in some areas while exposing others.

Under a microscope, the formations revealed a series of individual black filaments intertwined with sand grains that are characteristic of microbial mat communities.

"This is what's called binding and trapping — this is how a mat structure becomes stabilized against waves," Hazen said.

And the rocks also contained key mineral forms that are characteristic of the structures.

The ancient microbial communities, which may have been purple or brown and very smelly, Hazen said, probably lived along hundreds of miles of seashore, anchoring to the sand via filaments and harvesting nutrients from the sediments that washed ashore. Similar mats are found today in coastal regions with stagnant water.

More primitive rock-eating bacteria, called chemolithotrophs, likely evolved before the microbial mats, though no trace of Earth's earliest pioneers has yet been found. Chemolithotrophs harvest energy by chemically modifying minerals such as iron or sulfur in the rock, and many such bacteria are still alive today.

But the newly discovered communities were anchored to the seashore close to sun and water, so they probably weren't eating minerals found in rock. Instead, they must have harvested energy through photosynthesis, suggesting such bacteria evolved earlier than previously thought.

"That means very early in Earth's history, microbes had switched from using rocks for its energy to using light," Hazen said.