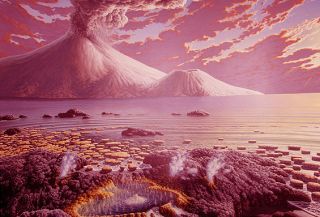 Was this what Earth looked like during the Archean eon?
(Image: © Peter Sawyer / Smithsonian Institution)

Structures thought of as the oldest known fossils of microbes might actually be microscopic mineral formations not associated with life, suggesting that astrobiologists must be careful calling alien objects "life" when scientists have trouble telling what is or was alive on Earth.

More than 20 years ago, microscopic structures uncovered in the roughly 3.5-billion-year-old Apex Chert formation in western Australia were described as the oldest microbial fossils. These structures were interpreted as cyanobacteria, once known as blue-green algae, embedded in a silica-loaded rock formed in a shallow marine setting. These structures were all detected in slices of rock just 300 microns thick, or roughly three times the diameter of a human hair.

However, the interpretation of the structures has always been controversial, and it is still hotly debated among scientists searching for Earth’s earliest evidence for life. Specimens from the site apparently displayed branching structures that some researchers said were inconsistent with life, while others dismissed such branching as artifacts from photo software

Analysis of the structures themselves suggested they were carbon-based, and therefore associated with the organic chemistry of life, but some contended they were a type of carbon known as graphite, while others said they were kerogen, a mixture of organic compounds. [5 Bold Claims of Alien Life]

Now University of Kansas geospectroscopist Craig Marshall and his colleagues have taken another look at the Apex Chert structures and determined they might not be carbon-based after all. Instead, they seem to just be a series of fractures filled with crystals.

"It's one of those funny moments in science when you go out to do one thing and it completely flips 180 on you," Marshall said.

The scientists collected 130 pounds (60 kilograms) of samples from the original site and made very thin slices 30 to 300 microns thick.

"We were interested in developing new methods of looking at ancient microfossils, and so we were drawn to the Apex Chert as these putative microfossils are so iconic," Marshall explained. "However, when we started working on the rocks, we discovered things were a little more complex than we thought they would be."

In the thicker slices, they saw reddish-brown features resembling the previously described microfossils. However, in the thinner slices, these structures appeared to be less like microbes and more like fractures. These cracks seem to be filled with a light mineral possessing a coarse block-like texture, as well as with a dark mineral that came in thin plates. Further analysis suggests the lighter material was quartz and the darker matter was iron-rich hematite.

Marshall and his colleagues note they could be looking at different structures than past studies did, which could explain why the results of their chemical analyses differ. However, Marshall suggested there could also be a number of other explanations — for instance, prior investigations might have mistakenly analyzed carbon-rich material on the surface of the structures and concluded the "microfossils" themselves were carbonaceous. Also, in the analytical methods the researchers used, the signature for hematite is very similar to that of carbon.

"It was a lesson in believing in the data over what is 'known' about these microstructures," Marshall said.

"These results explain the conundrum of the pale color of the microstructures — if they were truly organic, they shouldn't be pale in such metamorphosed rocks," said geobiologist Roger Buick at the University of Washington, who did not take part in this research.  Buick studies the Archean eon, which lasted from 3.8 billion to 2.5 billion years ago and encompasses the time when life first arose on Earth. "Their most important implication is that they virtually seal the case that has been building for many years that these microstructures are not ancient microfossils of cyanobacteria." [7 Theories on the Origin of Life]

"It is still worthwhile searching for Archean microfossils, and specifically for cyanobacterial microfossils, because there are other independent lines of evidence that oxygenic photosynthesis and hence cyanobacteria first evolved during the Archean eon," Buick added. "However, the scarcity of well-preserved rocks of such ancient age will make the task very difficult."

Paleobiologist J. William Schopf at the University of California, Los Angeles, who originally interpreted the Apex Chert structures to be cyanobacteria-like fossils, has noted that he and a colleague have prepared a response to this new study, but it won’t be available for a few weeks.

If the new study is true, the findings are important not only when it comes to evaluating evidence of life in ancient rocks on Earth, but have ramifications for astrobiological prospecting elsewhere in the universe.

"If it is really this hard to find convincing evidence for life on early Earth when we know there is life on Earth now, then it becomes clear that we need to be extra cautious interpreting data collected on Mars," said paleobiogeochemist Alison Olcott Marshall at the University of Kansas, a co-author of the new study.

The scientists detailed their findings online Feb. 20 in the journal Nature Geoscience.

This story was provided to LiveScience by Astrobiology Magazine.