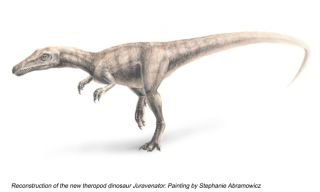 The discovery of a new dinosaur species without feathers usually doesn't generate as much of a stir as finding a feathered one, but a newfound fossil has scientists questioning the very origin of feathers.

This suggests that feathers originated through convergent evolution—where one trait evolves separate in different creatures. The process known to have played a role in poison production in ants and poison frogs, swimming in mammals as well as fish, and wings on both insects and birds.

This research is detailed in the March 16 issue of the journal Nature.

The fossil was discovered in a limestone quarry in the Jura Mountains in southern Germany, and is named Juravenator starki. It was a 2.5 foot-long juvenile when it died nearly 150 million years ago.

It belongs to a family of carnivores that walked on two feet called theropods. It's rare to find small theropods, mainly because they aren't big and because they break easily, but especially ones of this age in Europe. Around 150 million years ago, Europe was mostly flooded, leaving very little land—mostly in the form of islands—for dinosaurs to live on.

The fossil is nearly completely preserved from head to tail, and remnants of skin cover its tail. Although it is closely related to contemporary feathered dinosaurs, the telltale signs of feathers are missing.

"The way the skin is preserved, you can tell the animal did not have feathers," said study coauthor Luis Chiappe of the Natural History Museum in Los Angeles. "Otherwise, you could probably see feather buds."

Dinosaurs of a feather

Based on their shape, early feathers were probably used for insulation rather than flight. As the animals became more metabolically active on their way to becoming warm blooded, their bodies would have produced heat, but without insulation this energy would easily waft away.

Feathers would have provided the extra layer of insulation to prevent heat loss, like wearing a sweater, allowing the animal to be more active.

It's also possible that the feathers were good for identifying dino kin or for sexual displays during courtship.

J. starki lived around the same time as and was related to the first feathered dinosaurs, such as Archaeopteryx, Compsognathus, and Sinosauropteryx.

"This is a dinosaur that genealogically you expect to have feathers," Chiappe told LiveScience. "So what's going on here that it doesn't?"

Chiappe suspects that the evolution of feathers happened twice, an example of convergent evolution where similar structures for similar functions evolve separately in different species. Wings are a good example of this style of evolution—birds and insects individually developed wings for flying, although both families of animals are clearly different.

Another option is that really was a common feathered dinosaur ancestor, but somewhere along the line J. starki lost its feathers.

"We don't have a precise explanation for why this dinosaur doesn't have feathers," Chiappe said. "We see it as a red flag that says ‘maybe you guys have been interpreting the evolution of feathers in too simple a way. Maybe things are more complex.'"