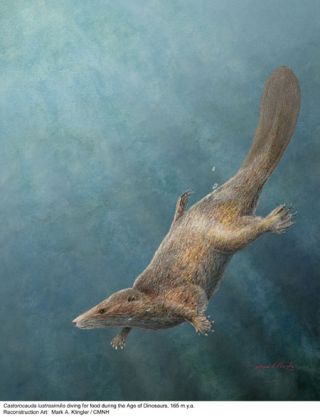 Illustration of Castorocauda lutrasimilis. The artwork of the reconstructed animal is 50% of actual fossil size.
(Image: © Mark A. Klingler/CMNH)

Newfound remains of a beaver-like creature suggest that mammals swam with dinosaurs.

This critter was a "giant among midgets," researchers said, dwarfing the other pint-sized mammals scurrying around during the Jurassic period.

It also holds the title of the first-known aquatic mammal, arriving on the scene nearly 100 million years before the previous record holder.

The animal, called Castorocauda lutrasimilis, was discovered in dried-up lake bed within the Inner Mongolia Region in China and has been dated to the Middle Jurassic period, about 164 million years ago.

Preservation of specialized, bi-layer fur—one to keep them warm and dry, the other for protection—is the first of its kind in mammals. Beavers and otters, which also have this type of fur, didn't show up until about 55 million and 25 million years ago. Full-time aquatic mammals such as whales and manatees first appear during that period as well.

Like a beaver or platypus, the newfound creature's hind feet were webbed for easy paddling while its front feet were better suited for digging and burrowing. It had a flattened, scaly tail like a beaver, and it sported sharp teeth, like an otter.

"We discovered the world's first mammalian swimmer," said study author Zhe-Xi Luo of the Carnegie Museum of Natural History. "This mode of life of fish eating, swimming, and digging combined is very different than the traditional stereotype that Jurassic mammals were very small, limited to eating insects, and lived mainly on the ground."

The finding is detailed in the Feb. 24 issue of the journal Science.

Big mammal on the block

From snout to tail, Castorocauda, measures about 17 inches, roughly the same size as a modern-day female platypus. Indeed, at a time when most mammals weighed in just around one tenth of a pound, Castorocauda was a relative behemoth.

"This thing is close to 800 grams (1.75 pounds), so it's a giant among the midgets," Luo told LiveScience. "It got so much larger because it was capable of doing different things than the small-body mammals."

As Castorocauda evolved larger and larger, Luo said, one of those different things was to make the move to the water, where its fish-snaring teeth likely helped it grow even more.

Although Castorocauda bears many similarities to beavers, otters, and platypuses, it's not an ancestor of any of them. It is what scientists sometimes call a "dead-end species."

Modern mammals fall into three categories—the live-birthing placentals, the egg-laying monotremes, and the pouch-rearing marsupials. After comparing telltale jaw and skull characteristics of each of these groups to Castorocauda, researchers determined that it was something else entirely.

"This creature falls outside the common ancestor of both monotremes and beavers, although it is a near relative," Luo said.

That means that mammalian adaptations for swimming must have evolved a second time. This is an example of convergent evolution, in which different species in similar environments adaptively evolve structures that look and function similarly, such as the wings of both birds and insects.

Castorocauda was most likely an egg layer, like platypuses, Luo said. Live birthing is a more recent adaptation, and this animal most likely went the primitive route.