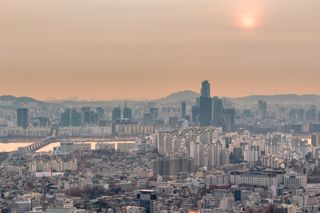 The harmful effects of air pollution affect far more than a person's respiratory system; previous research has found that it can also hurt babies in the womb.

Now, a new, small study offers insights into precisely how air pollution can harm fetuses. In the study, researchers found microscopic soot particles in the placentas of pregnant women living in London, suggesting that these harmful particles can pass into the umbilical cord.

Earlier studies have shown that there's an "association between maternal exposure to air pollution and effects on the fetus,” said study co-author Lisa Miyashita, a postdoctoral researcher at Queen Mary University of London (QMUL). Miyashita's new research was presented at the European Respiratory Society International Congress in Paris on Sept. 16. The findings have not yet been published in a peer-reviewed journal. [7 Ways Pregnant Women Affect Babies]

The previous studies found that problems including "premature birth, low birth weight, infant mortality and childhood respiratory problems seem to be linked to the mothers' exposure to air pollution," Miyashita told Live Science. No studies, however, have looked at the potential mechanisms behind this association, she added.

To explore the link, Miyashita and her colleagues looked at immune cells called macrophages taken from the placentas of five women, all of whom delivered healthy babies via cesarean section. None of the women's pregnancies had complications, and none of the women were smokers.

Macrophages are white blood cells that can be found in all types of tissues in the body. They're tasked with hunting down threats to the body such as germs, cancer cells and air pollution particles. Once they detect a threat, they engulf it and digest it, to prevent it from harming the body.

The QMUL team has previously studied macrophages taken from the lungs of Londoners and found that they were full of air pollution particles, Miyashita said. The researchers wanted to see if they could also find these particles in macrophages taken from the placenta, a finding that would mean the air pollution particles had crossed into the bloodstream from the lungs.

Indeed, a few recent studies have hinted that so-called ultrafine particles — particles smaller than 100 nanometers in diameter — might be able to do just that, Miyashita said.

Still, the researchers had no idea whether they'd find anything at all, she added.

Placenta cells under the microscope

Using powerful microscopes, the team looked at 3,500 placental macrophages taken from the five women. In 60 of those cells, the scientists found black areas that looked "exactly the same" as the pollution-filled macrophages taken from lung cells, Miyashita said. Contaminated cells were found in samples from all five placentas in the study.

The researchers only found the polluted macrophages in the placental cells; they didn't look for pollution-filled cells in the umbilical cord, which connects the placenta to the fetus, or in the fetus itself. But even if the particles remain in the placenta and don't cross over into the fetus, they could still negatively affect the baby's health, lead study author Dr. Norrice Liu, a pediatrician at QMUL, said in a statement.

"We do not know whether the particles could move across into the fetus," Liu said. “Our evidence suggests that this is indeed possible, but even if they only have an effect on the placenta, this will have a direct impact on the fetus."

That's because “these are fine particles, [and] all fine particles stimulate inflammatory processes" that could harm the fetus, said Dr. Tobias Welte, the vice president of the European Respiratory Society and a professor of pulmonary medicine at the University of Hannover, Germany, who was not part of the study. “Some of these particles could be more toxic and carcinogenic than others, but they are all bad for the body."

Welte said that the new results are significant, because they show for the first time that ultrafine air- pollution particles can directly affect unborn children.

The understanding of air pollution, he said, is shifting, as more studies show that ultrafine air pollution particles don't just stay in the lungs but penetrate further into the body where they could cause harm. [8 Ways That Air Pollution Can Harm Your Health]

"Air pollution is no longer a respiratory problem, it's a systemic problem," Welte told Live Science. "Our hearts, brains, kidneys and lymph nodes could be virtually full of these particles. The exposure of unborn children to these particles is particularly worrying as it can affect the development of their organs."

Miyashita said that pregnant woman living in cities with high levels of air pollution should try to avoid busy roads and areas as much as possible to reduce their exposure.

The researchers are planning to conduct a larger study to develop a better understanding of how the presence of these particles in the placenta might affect the health and development of children.