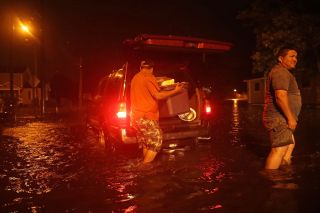 People pack their belongings after evacuating their house when the Neuse River went over its banks and flooded their street in New Bern, North Carolina, during Hurricane Florence Sept. 13, 2018.
(Image: © Chip Somodevilla/Getty Images)

The brunt of Hurricane Florence slammed North Carolina this morning with winds raging an astonishing 90 mph (150 km/h), according to the National Hurricane Center in Miami. The storm made landfall at around 7:15 a.m. ET near Wrightsville Beach, North Carolina.

More than 430,000 people in North and South Carolina are without power, and water is rising along the coast, where people in some towns have experienced dramatic rescues due to the towering storm surge.

On Thursday afternoon, the storm's outer rain bands began lashing down on the coast. A weather station in Atlantic Beach, North Carolina, registered 12.7 inches (32.3 centimeters) of rain over a 24-hour period, according to a CNN report. This is an immense amount of rainfall for the state, which gets an average of just 41 inches (104 cm) of rain a year. When all is said and done, Florence could pour 40 inches of rain along some parts of the North Carolina coast, according to CNN.

Overnight about 150 people in New Bern, North Carolina, were trapped in their homes and other establishments after rising water due to storm surge reaching 10 feet, according to CNN. "In a matter of seconds, my house was flooded up to the waist, and now it is to the chest," said Peggy Perry, who was trapped with three relatives in her home in New Bern, CNN reported. "We are stuck in the attic."

Hurricane Florence slowed dramatically as it approached shallower waters along the coast, dropping from a Category 4 hurricane with 130 mph (209 km/h) winds on Wednesday (Sept. 12) to a Category 2 Thursday. But the National Hurricane Center warned people of the hurricane's strong winds and its "life-threatening storm surge and rainfall" in an update Thursday evening.

To hammer home the point, The Weather Channel created graphics showing just how dangerous storm surges can be, explaining how these turbulent waters can include detritus, chemicals and even electricity. What's more, Florence's historic amount of rainfall may lead to flooding of pig manure lagoons, and the hurricane's winds and storm surge have the potential to damage nuclear reactors in the region, Live Science previously reported.

"The center of Florence is expected to move inland across extreme southeastern North Carolina and extreme eastern South Carolina today [Sept. 14] and Saturday," the NHC said in a statement. "Florence will then move generally northward across the western Carolinas and the central Appalachian Mountains early next week."

Florence will likely weaken as it moves inland, especially on Saturday (Sept. 15) as it moves over South Carolina, according to National Hurricane Center predictions.

Hurricane Florence is a massive storm, and some of its girth is due to climate change, according to a new study that finds that the hurricane is 50 miles (80 km) larger and has 50 percent more rain than it would if human-made climate change weren't affecting it, Live Science previously reported.