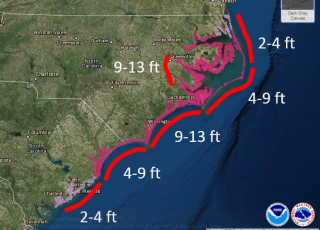 A hurricane can kill you in a lot of different ways. And even though meteorologists sort storms into categories by the strength of their winds, it's actually the storm surge that's most dangerous, as AccuWeather reported.

Hurricanes can push masses of water from the sea over land when they come ashore, raising local sea levels by as much as 20 feet (6 meters), according to the National Hurricane Center. But even much lower flood levels can be dangerous and reach surprisingly far inland, as The Weather Channel demonstrated in a stunning video released today. [Hurricane Florence: Photos of a Monster Storm]

Reporter Erika Navarro explained that even low-seeming flood levels can be dangerous, and include dangerous detritus, chemicals and even electricity. As she did so, the walls of the studio seemed to disappear on-camera, replaced by rising floodwaters around her.

"If you find yourself here [in rising floodwaters], you need to get out," she said. "If you're told to go, you need to go. Listen to local officials, and make sure you heed their advice.