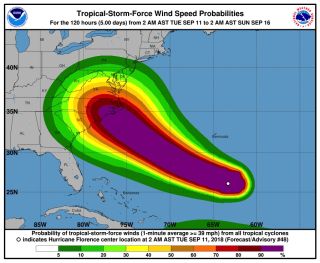 The probability (with magenta being the highest probability) that Hurricane Florence will reach tropical-storm-force winds.
(Image: © NOAA; National Weather Service)

Hurricane Florence is barreling toward the southeastern United States because of the so-called "atmospheric brick wall," the high-pressure system that's guiding it there, forecasters report.

If the hurricane makes landfall, this brick wall will likely play the villain again; the brick wall is expected to weaken, meaning it won't help steer Florence out to sea. Rather, Florence is predicted to linger inland, where it will likely dump at least a foot (0.3 meters) of rain, said Michael Bell, an associate professor of atmospheric science at Colorado State University.

But Florence isn't expected to make landfall until Thursday (Sept. 13), so "there is still a lot of uncertainty in how this is going to play out," Bell told Live Science. [Hurricane Season 2018: How Long It Lasts and What to Expect]

During a typical Atlantic hurricane season, the majority of hurricanes are steered by a high-pressure system that sits around Bermuda. "Most of the storms that come off of Africa generally move from east to west, and then they curve around that [high-pressure system and go] to the north and, hopefully, off into the Atlantic," Bell told Live Science.

But in this case, the high-pressure system has shifted to the west, Bell said. "So, that high pressure is currently driving Florence toward the East Coast," he said. As Florence approaches the coast, it is forecast to strengthen. Currently, Florence has winds of 130 mph (215 km/h), making it a Category 4 hurricane on the Saffir-Simpson Hurricane Wind Scale, the National Hurricane Center reported today (Sept. 11).

As for why this high-pressure system has shifted to the west, Bell called it "bad timing."

According to predictions, this brick-like wall high-pressure system will then weaken after the hurricane makes landfall, "and the steering flow that's driving [Florence] right now will stop or will stall out," Bell said. Without a high-pressure system to guide it, Florence could linger and drop massive amounts of rain, much like Hurricane Harvey did over Houston last year.

"Harvey had a large high-pressure system to both its northwest and northeast that caused it to stall out and hang out for almost a week in the Texas area," Bell said. "Fortunately, it doesn’t look like — at least with early indications — that we'll be looking at that long of a duration [of rain], but even a few days of rainfall from a hurricane can be really serious, and that's what we're worried about right now."

However, hurricanes are notoriously tricky to predict. For starters, the National Hurricane Center has charted another weather disturbance in the Caribbean, and it's unclear whether and how this disturbance will interact with Florence, Bell said. In addition, the amount of rainfall Florence drops inland will depend on exactly when and where it comes ashore, he said.

Even the hurricane's intensity can affect the direction it takes, as "the atmosphere has different winds at different heights, so the winds at the upper levels may be different than they are at the lower levels," Bell said. "It's not just a cork in a stream. There's a lot of interactions going on between the storm and the environment, and I think that's what makes it a difficult problem, but an important one to study."