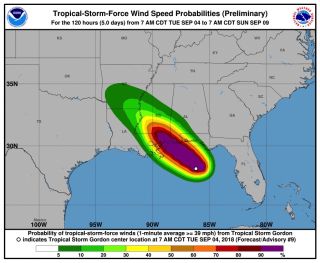 A forecast of tropical-storm-force winds that may hit the Gulf Coast from Tuesday to Sunday (Sept. 4-9).
(Image: © NOAA)

Tropical Storm Gordon is expected to intensify today, morphing into a hurricane just before it hits the Gulf Coast tonight (Sept. 4), according to the National Hurricane Center (NHC) in Miami.

In anticipation, the center announced a storm surge warning, meaning there is "a danger of life-threatening inundation," along the coast from Louisiana to Florida, according to the NHC's morning briefing.

For now, Tropical Storm Gordon has winds blowing at 65 mph (100 km/hour), and its eye (the center of the storm) is located about 145 miles (235 kilometers) from the mouth of the Mississippi River, the NHC said. If Gordon's wind speeds reach 74 mph (119 km/h), the storm will be classified as a hurricane, according to the Saffir-Simpson Hurricane Wind Scale. [Hurricane Season 2018: How Long It Lasts and What to Expect]

Right now, the tropical storm's outer rain bands are creating "squally weather" on the western Florida Panhandle, the NHC said. Weather conditions are expected to worsen over the next several hours, and the NHC didn't mince its words for people living along the coast, including from Shell Beach, in eastern Louisiana, to Dauphin Island, Alabama, an area that is expected to have a storm surge of between 3 and 5 feet (1 to 1.5 meters) above normal.

"This is a life-threatening situation," the NHC said. "Persons located within these areas should take all necessary actions to protect life and property from rising water and the potential for other dangerous conditions."

Gordon is also predicted to pour buckets of rain over the Gulf Coast — between 4 and 8 inches (10 to 20 centimeters) — through late Thursday (Sept. 6), the NHC said. This area includes the Florida Panhandle, southwest Alabama, southern and central Mississippi, southeastern and northeastern Louisiana, and southern Arkansas. Some areas may even receive up to 12 inches (30 cm) of rain during this time, the NHC said.

This excessive rainfall "will cause flash flooding across portions of these areas," the NHC noted. In addition, Gordon may cause a "few tornadoes" to rip through this afternoon through tonight along the coasts of Mississippi, Alabama and the Florida Panhandle, the NHC said.

Governors in the states of Louisiana, Mississippi and Alabama have declared states of emergency, according to NPR, and Florida Gov. Rick Scott asked for "Floridians and our visitors to remain vigilant," according to a statement.

Gordon is moving steadily at 15 mph (24 km/h) toward the coast, the NHC said. However, the storm is expected to weaken as it moves inland. The center will continue to release updates here.

The Atlantic hurricane season, which runs from June 1 to Nov. 30, typically peaks in September. Last year's monster storms included Harvey, Irma and Maria. This past May, the National Oceanic and Atmospheric Administration predicted that the 2018 hurricane season would be active but less intense than last year's, Live Science previously reported.