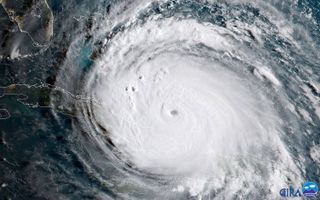 The NOAA satellite GOES-16 captured this geocolor image of Hurricane Irma passing the eastern end of Cuba at about 8:00 a.m. EDT on Sept. 8, 2017.
(Image: © NOAA/CIRA)

Brace yourself for the 2018 hurricane season — it's going to be more active than usual, though less intense than last year's.

Today (May 24), experts with the National Oceanic and Atmospheric Administration (NOAA) issued their forecast for the Atlantic hurricane season, which begins June 1 and lasts until Nov. 30.

The 2018 season is anticipated to be slightly more active than usual, with a 75 percent chance of an above-normal or near-normal season, NOAA representatives announced at a news conference. [Hurricane Season 2018: How Long It Lasts and What to Expect]

One of the factors that is somewhat defusing the intensity of the upcoming hurricane season is the probable formation of a weak El Niño, a phase of a climate cycle called the Southern Oscillation. During an El Niño phase, ocean temperatures in the tropical eastern Pacific Ocean are slightly warmer than average, which affects wind circulation in the Atlantic and can suppress hurricane formation, atmospheric scientist and NOAA representative Neil Jacobs reported.

NOAA officials also predicted an 80 percent chance of a near- or above-normal hurricane season in the eastern and central Pacific regions. The eastern Pacific will likely see the formation of as many as 20 named storms, of which three to seven could strengthen to become major hurricanes. As many as six tropical cyclones, a category which includes tropical depressions, tropical storms and hurricanes, are expected to emerge in the central Pacific.

The NOAA prediction promises somewhat of a respite this year, compared with the "furious season" seen in 2017 — the most active season since 2005, and the seventh most active season on record, NOAA reported in its 2017 hurricane season wrap-up.

By the time the 2017 hurricane season wound to a close, a total of 17 named storms had formed in the Atlantic. Of those, 10 reached hurricane strength and six developed into major hurricanes; and two of the year's most powerful storms became the first major hurricanes to strike the continental U.S. in 12 years, according to the NOAA account.

While the 2018 hurricane season is expected to be less intense than in 2017, there is still a heightened hurricane risk for the mainland U.S. and islands in the Caribbean, Gerry Bell, a hurricane climate specialist and research meteorologist at NOAA's Climate Prediction Center (CPC), said at the news conference.

"Typically, with a more active season, the entire region around the Caribbean Sea, as well as both the Gulf and Atlantic coasts of the United States, are at an increased threat," Bell said. "When you have a more active season, that's when you have more storms forming in the tropical Atlantic. Those storms tend to track farther westward, and that's why the Caribbean and the continental United States are more at risk."

Bell added, "We know certain areas have been compromised from last year's storms, and that makes hurricane preparedness even more important this year."

NOAA's predictions for 2018 follow a forecast issued April 5 by scientists with the Tropical Meteorology Project at Colorado State University (CSU). At the time, the CSU scientists predicted that the 2018 hurricane season would be slightly above average, producing 14 named storms. According to the CSU forecast, about seven storms are anticipated to reach hurricane strength, and three will likely be powerful, destructive hurricanes, Live Science previously reported.

NOAA will issue an update to its forecast in early August, when hurricane season reaches its peak, the agency announced in the statement.