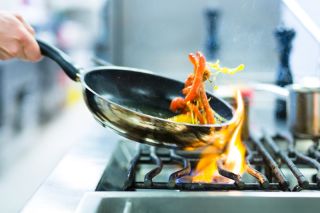 Chemicals called perfluoroalkyl and polyfluoroalkyl substances, or PFASs, are found in many products, including some nonstick cookware products.
(Image: © Shutterstock)

For those who have a hard time losing weight, there's some good and bad news.

The bad news is that common chemicals in the environment may play a role in weight gain, a new study suggests. The good news? Diet and exercise may counteract these obesity-promoting effects, according to the study.

The findings suggest yet another benefit of diet and exercise, the researchers, from Harvard Medical School, wrote in their paper, published online yesterday (Aug. 31) in the journal JAMA Network Open. [12 Worst Hormone-Disrupting Chemicals & Their Health Effects]

The study focused on chemicals called perfluoroalkyl and polyfluoroalkyl substances, or PFASs. These are synthetic chemicals that have been used in a variety of products, including nonstick cookware, water-repellent fabrics, grease-proof food packaging, personal care products and cleaning products.

PFASs can accumulate and stay in the body for a long time, and studies have linked exposure to some PFASs to certain health problems, such as low infant birth weights, thyroid disease and reproductive problems, according to the U.S. Environmental Protection Agency.

Some studies also suggest that the chemicals may interfere with some hormone systems in the body. Exposure to PFASs has also been linked with weight regain after dieting, and with a lower metabolic rate.

In the new study, the researchers analyzed information from about 950 people who were overweight or obese, and who had prediabetes. (People with prediabetes have blood sugar levels that are abnormally high, but not high enough to be classified as diabetes.)

The participants were enrolled in the study between 1996 and 1999, and the original aim of the study was to examine whether a weight-loss program could prevent or delay the onset of type 2 diabetes in people at risk for the disease. But the participants also gave blood samples at several points during the study, which the researchers used to measure levels of PFASs. The participants were followed for about 15 years.

About half of the participants were randomly assigned to a weight-loss program involving diet, exercise and behavior change, along with counseling and training to help with weight loss. The goal of the weight-loss program was for participants to lose 7 percent of their body weight. The other half of the participants were assigned to a "placebo" group, which received standard information on the importance of diet and exercise, but no counseling or training.

As expected, those in the weight-loss program initially lost the most weight — about 15 lbs. (7 kilograms) after one year, but they gradually regained most of the weight over time. (However, after 10 years, they still weighed about 4.4 lbs. (2 kg) less than they did at the beginning of the study.) Those in the placebo group maintained about the same weight, on average, throughout the study.

"This finding may suggest that PFASs act as obesogens [chemicals that may increase the susceptibility to weight gain] only in the presence of other risk factors for obesity; but not when these risk factors are reduced," the researchers wrote.

The researchers noted that because their study involved overweight and obese people at risk for type 2 diabetes, the findings may not necessarily apply to other groups of people. In addition, the blood levels of some PFASs have declined overall in the U.S. population in recent years, and so the concentrations of PFASs among study participants could have been higher than current levels in the U.S. population, the researchers said.

The idea of chemicals and pollutants in the environment affecting our health is not new, said Dr. Vijaya Surampudi, a physician with the Risk Factor Obesity Weight Management Program at UCLA Health who was not involved in the study. For years, researchers have examined the question of whether certain factors in our environment affect the expression of our genes, Surampudi said. Previous studies have found links between exposure to air pollution and type 2 diabetes; and other studies suggested the chemical bisphenol A (BPA) may promote fat accumulation in cells.

Still, like many previous studies, the new study found only an association and cannot prove that PFASs  cause weight gain. At this point, the finding is an observation, Surampudi told Live Science, and future studies are needed to explore the question further.

But one thing is clear. "Nothing will ever change the fact that diet and exercise are the mainstay in trying to promote good health," Surampudi said. "It's one of the easiest things we can do."