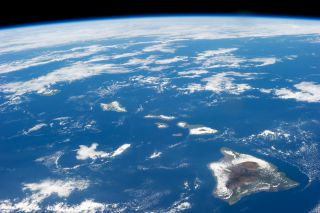 Hawaii is seen from space, all alone in a big ocean.
(Image: © NASA)

Hurricane Lane is set to strike Hawaii from the southeast as a Category 4 storm, most directly threatening the Big Island. Officials have encouraged residents to stock up on supplies and prepare their homes for the storm, creating scenes more familiar in southeastern U.S. states. [Hurricane Season 2018: How Long It Lasts and What to Expect]

But why is it so unusual for Hawaii to find itself in this position at all? It's an island state in the middle of the Pacific Ocean. And Pacific cyclones regularly reach terrifying intensities when they strike farther to the west.

In fact, Hawaii has weathered landfalls from only two tropical storms and two hurricanes since 1959, CNN reported. In 2014, two hurricanes appeared ready to hit Hawaii with a one-two punch, the Associated Press reported at the time. But only one, Iselle, downgraded to a tropical storm, actually made landfall. Hurricane Julio, Iselle's twin, tracked too far north and missed Hawaii.

And that, it turns out, explains a lot of Hawaii's usual hurricane luck.

"Hawaii is a small target in the big ocean, so it just has to be really good timing and the conditions have to be right for us to get a direct hit," Eric Lau, a meteorologist for the National Weather Service in Honolulu, told the Associated Press in 2014.

Even with hurricanes periodically skirting past the Hawaiian islands, the Pacific has been big enough and Hawaii small and lucky enough that few of those storms have actually landed.

There are also broader forces in the Pacific that tend to push hurricanes toward Asia. As Live Science reported in 2009, hurricanes form in the tropics. And prevailing winds in the tropics flow west. In the Atlantic Ocean, this shoves storms up against the U.S. and Mexican coastlines. But in the Pacific, those winds tend to shove the storms toward Asia. ("Typhoon" is the term for a hurricane that forms in the western Pacific.) This is why hurricanes almost never strike California.

When powerful hurricanes do strike Hawaii though, they can be very dangerous. Hurricane Iniki, the most powerful Hawaiian hurricane recorded before Lane, killed six people, injured more than 1,000 and caused $1.8 billion in damage back in 1992, according to TK. More so than in certain regions of the U.S. southeast, large-scale evacuations are challenging on Hawaii's remote, cramped islands.

Hawaii emergency officials have opened up limited shelters to the public but have encouraged residents to shelter in safe rooms in their homes if possible.