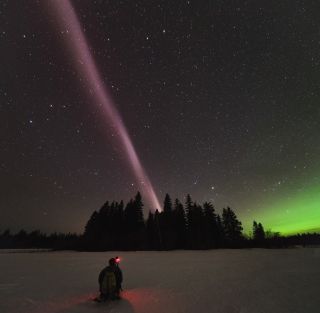 The mysterious ribbon of atmospheric light known as STEVE slashes through the sky over British Columbia, Canada, on April 10, 2018. According to a new study, STEVE is not an aurora (visible here in the right corner of the horizon) but something completely new to science.
(Image: © Ryan Sault / Alberta Aurora Chasers)

Late at night on July 25, 2016, a thin river of purple light slashed through the skies of northern Canada in an arc that seemed to stretch hundreds of miles into space. It was a magnificent, mysterious, borderline-miraculous sight, and the group of citizen skywatchers who witnessed it decided to give the phenomenon a fittingly majestic name: "Steve."

Given its coincidence with the northern lights, Steve was just thought to be part of the aurora — the shimmering sheets of nighttime color that appear in the sky when charged plasma particles streak out of the sun, sail across space on solar winds and jolt down Earth's magnetic field toward the planet's poles. However, a new study published today (Aug. 20) in the journal Geophysical Research Letters suggests that such a simple explanation might not apply. [Aurora Images: See Breathtaking Views of the Northern Lights]

According to researchers at the University of Calgary in Canada and the University of California, Los Angeles, Steve does not contain the telltale traces of charged particles blasting through Earth's atmosphere that auroras do. Steve, therefore, is not an aurora at all, but something entirely different: a mysterious, largely unexplained phenomenon that the researchers have dubbed a "sky glow."

"Our main conclusion is that STEVE is not an aurora," lead study author Bea Gallardo-Lacourt, a space physicist at the University of Calgary in Alberta, Canada, said in a statement. "So right now, we know very little about it. And that's the cool thing."

There's something about Steve

To photographers and stargazers in northern climes, Steve has been a familiar night phenomenon for decades. But the mysterious ribbons of light only entered the scientific literature for the first time earlier this year, thanks largely to Steve-tracking efforts coordinated by Facebook groups like the Alberta Aurora Chasers. Writing in the journal Science Advances in March, researchers (including Gallardo-Lacourt) decided to keep the name "Steve" as the official nomenclature for the colorful happening, but they changed it to an acronym standing for "Strong Thermal Emission Velocity Enhancement" — aka STEVE.

Compared to the northern lights — which tend to shimmer in broad bands of green, blue or reddish light depending on their altitude — Steve is remarkably slim, usually appearing as a single ribbon of purplish-white light. What this ribbon lacks in girth, it makes up for in length; unlike the wavy northern lights, Steve appears to stab straight upward into the night sky, often spanning more than 600 miles (1,000 kilometers).

This study found that, for all its quirks, Steve seemed to look and act like its more familiar cousin, the aurora borealis. When a European Space Agency satellite passed directly through Steve in July 2016, instruments on board confirmed that a pipeline of incredibly fast, ridiculously hot gas was slicing through the atmosphere there. At about 200 miles (300 km) above Earth, the air inside Steve blazed about 5,500 degrees Fahrenheit (3,000 degrees Celsius) hotter than the air on each side, and moved about 500 times faster. This band of hot, surging gas was about 16 miles (25 km) wide.

On March 28, 2018, Steve again appeared in the skies of northern Canada and happened to fall within the sight of both ground- and sky-based recording equipment. In the new University of Calgary study, Gallardo-Lacourt and her colleagues decided to use the data recorded that night to further investigate Steve's mysterious origins.

For their new study, the team combined images taken by a network of ground-based cameras with data collected from one of the National Oceanic and Atmospheric Administration's Polar-orbiting Operational Environmental Satellites, which were equipped with instruments capable of detecting charged particles descending through Earth's atmosphere.

Contrary to the findings from the Steve study published earlier this year, the satellite did not detect any charged particles raining down toward Earth's magnetic-field lines, indicating that whatever created Steve did not follow the same rules as the solar particles that create the aurora.

According to the authors, that means Steve is likely not a feature of the aurora but is actually something completely different. What could that something be? According to Gallardo-Lacourt, that's "completely unknown." But, for the sake of keeping the conversation going, she and her colleagues dubbed the mysterious force a "sky glow."

"Based on our results, we assert that STEVE is likely related to an ionospheric process," the researchers wrote in their study, referring to the level of Earth's atmosphere that extends between 50 and 600 miles (80 to 1,000 km) above Earth's surface and sits directly below the planet's magnetic field. More observations taken at different levels of the atmosphere will be required to fully tease out the causes of that mystery of mysteries — good old Steve.