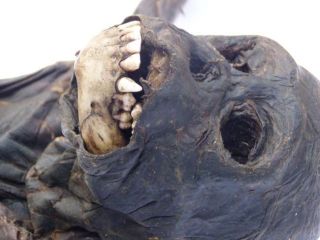 Head of the mummified infant chimpanzee Veve after being carried for 19 days post-death by the mother Vuavua.
(Image: © Claudia Sousa)

Chimpanzees may gather in hushed quiet to watch a fellow ape in her dying moments, and chimp mothers in the wild may carry their infants' mummified remains for weeks, according to new research on how humanity's closest living relatives deal with the deaths of those closest to them.

Insights into how chimpanzees respond to the death of one of their own are rare. One such instance came with the final hours of Pansy, a chimp more than 50 years old who lived in a Scottish safari park.

In the days leading up to the elderly chimp's peaceful demise in 2008, her group was very quiet and moved to sleep near her, the researchers found. Immediately before Pansy died, others groomed and caressed her often. One male chimpanzee, Chippie, apparently tested her for signs of life as she died by closely inspecting her mouth and moving her limbs.

"When the adult male behaved as though he was testing Pansy for signs of life, it struck home that the chimpanzees might indeed have greater awareness of the difference between life and absence of life than we previously thought," said researcher James Anderson, a primatologist at the University of Stirling in Scotland.

Soon after Pansy died, most of the chimpanzees left, but her daughter Rosie returned and remained by her mother all night.

"Several phenomena have at one time or another been considered as setting humans apart from other species — reasoning ability, language ability, tool use, cultural variation, and self-awareness, for example, but science has provided strong evidence that the boundaries between us and other species are nowhere near to being as clearly defined as many people used to think," Anderson said. "The awareness of death is another such psychological phenomenon."

In the past, when researchers saw adult chimpanzees lost to some kind of sudden trauma such as a fall from a tree or a leopard attack, other apes often responded with a great deal of commotion.

"In contrast to the frenzied, noisy responses to traumatic adult deaths, the chimpanzees witnessing the female’s death in our case were mostly calm," Anderson said.

Still, after Pansy died, Chippie did briefly attack the corpse three times, jumping or pounding on the body. These might have been attempts to resuscitate her, the researchers speculated, or perhaps expression of anger or frustration over her death. Afterward, his mother, Blossom, groomed him for an extraordinary amount of time, perhaps a sign of consolation and support.

"We know that feelings of denial and anger toward the deceased are quite common elements in our own response to bereavement," Anderson said. "It may be possible that Chippie was expressing something similar, in male chimpanzee fashion, with regard to Pansy."

The chimpanzees cleaned Pansy by removing straw from her body the next day, and watched silently when keepers then removed her remains. For several days they avoided sleeping on the platform where she died, even though it was normally a favored sleeping spot, and remained quiet and subdued for weeks after the death, eating less.

"In general, we found several similarities between the chimpanzees' behavior toward the dying female, and their behavior after her death, and some reactions of humans when faced with the demise of an elderly group member or relative, even though chimpanzees do not have religious beliefs or rituals surrounding death," Anderson said.

"The findings we've described, along with other observations of how chimpanzees respond to dead and dying companions, indicate that their awareness of death is probably more highly developed than is often suggested," he added. "It may be related to their sense of self-awareness, shown through phenomena such as self-recognition and empathy towards others."

Altogether, these findings "raise questions about the origins of some of our own ways of dealing with dying individuals," Anderson told LiveScience.

Feelings that chimps have for the dead are seen in the wild as well.

Scientists have followed a community of chimpanzees in the forests surrounding Bossou, Guinea, for more than three decades. A flu-like respiratory ailment in 2003 claimed the lives of five of the apes, including two young infants — Jimato, a 1.2-year-old male, and Veve, a 2.6-year-old female.

The chimpanzee mothers showed a remarkable response to the death of their offspring, zoologist Dora Biro at the University of Oxford in England recalled. "They continued to carry the corpses for weeks, even months, following death," she said.

During that time, the corpses mummified completely, with the bodies drying out and losing all their hair. Still, the mothers still cared for the bodies in ways reminiscent of how they were treated in life, even as the remains broke down. They carried them everywhere during their daily activities, groomed them, took them into their day and night nests when they rested, and chased away flies that circled the cadavers.

"Of course there was an element of the macabre, but at the same time we were also very sad — this is a community we had studied for years, we knew each individual very well, we had watched the infants grow, and we had watched them succumb to the disease over a period of weeks," Biro said. "Their death and the mothers' persistence in carrying the corpses were indeed tragic events for us."

Over time, the mothers gradually left the infants behind, Biro and her colleagues found.

They allowed other chimpanzees within the group to handle them more and more often and tolerated longer periods of separation from them, including times when other infants and juveniles were allowed to carry off and play with the corpses. Vuavua, the mother of Veve, eventually let go after 19 days, while Jire, Jimato's mother, did so after 68 days.

"I suspect that at the very least with time the mothers did gradually come to appreciate the finality of the situation more and more, particularly as the infants came to look less and less like real infants," Biro told LiveScience. "Their persistence in holding on could have been a byproduct of the extremely strong bond that exists between chimpanzee mothers and their infants, a bond which, under normal circumstances, makes sure that the mother of a live infant never abandons it before it is ready to be independent. Or it could have been their way of dealing with the death. The latter is somehow similar to one of the reactions we have to the loss of our loved ones — feelings of a refusal to let go even if we don't act on it in the same way as these chimp mothers did."

Almost without exception, the other chimps showed no aversion toward the corpses, despite the intense smell of decay and their decomposed appearance. Elsewhere, chimpanzees have been known to assault and even cannibalize dead infants, but no such violence was seen here, perhaps because of the largely vegetarian nature of this group of chimps at Bossou.

"They don't hunt monkeys like chimps at many other sites do because there aren't any in their habitat, and only very occasionally do they capture other small mammals as prey," Biro explained. "So Bossou group members could have been less likely to perceive the bodies as potential food."

Biro noted that a member of her team saw a very similar episode of dead infant carrying back in 1992 after the first time Jire lost an infant, a 2.5-year-old female named Jokro, also to a respiratory ailment. Jokro's loss might have played a part in why Jire carried her second dead infant Jimato for so long, Biro said, "but there are two other possibilities," she added.

One has to do with Jire's experience raising seven other infants, six of whom survived, one of which disappeared, fate unknown. "In each case, this would have involved extended periods — years — of full-time care, of not abandoning the infant until it was ready to leave," Biro said. "She could have thus grown accustomed to the fact that carrying and protecting offspring was tantamount to infant survival. This is why we think she may have carried her infant's remains for considerably longer than the other, first-time mother, Vuavua."

Another possible factor behind why Jire hung onto Jimato longer than Vuavua carried Veve was because Jimato was younger than Veve when he died, when Jimato was still very reliant on his mother. "Jire may have been responding in an age-appropriate manner, much less willing to leave the infant behind," Biro said.

Future research should aim to shed light on the extent to which chimpanzees understand and are affected by the death of a close relative or cohort, Biro said.

"How they perceive death is a fascinating question, and little data exist so far concerning chimpanzees' responses to the passing of familiar or related individuals either in captivity or in the wild," Biro said. "This would both have implications for our understanding of the evolutionary origins of human perceptions of death and provide insights into the way chimpanzees interpret the world around them."

Other primates have been known to carry infant corpses as well, including ring-tailed lemurs and mountain gorillas, albeit only for a few days. A strong mother-infant bond is actually a feature of primates in general — "primate infants are born completely helpless and undergo a slow process of maturation during which time they are completely reliant on the mother," Biro said. "So the fact that dead-infant-carrying is seen in other species of primates is not so surprising."

Chimpanzees are humans' closest living evolutionary relatives, "and they have already been shown to resemble us in many of their cognitive functions — they empathize with others, have a sense of fairness, and can cooperate to achieve goals," Biro said. "Our observations confirm the existence of an extremely powerful bond between mothers and their offspring which can persist, remarkably, even after the death of the infant."

Both teams of scientists detailed their findings in the April 27 issue of the journal Current Biology.