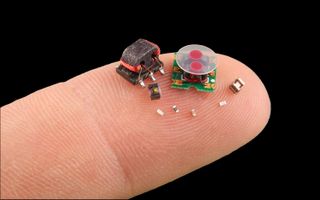 Robots that measure just a fraction of an inch in length could be used in search-and-rescue operations after national disasters, or to inspect hazardous environments.
(Image: © DARPA)

Picture the Olympic Games — except instead of human athletes, the competitors are all insect-sized robots.

That's the scenario proposed by the Defense Advanced Research Projects Agency (DARPA), representatives said in a statement. The group is seeking innovative designs for robots that measure just a fraction of an inch, and the tiny bots will compete against each other in a series of contests of strength, speed and agility — similar to those that try the limits of human achievement in the Olympics.

The robots would be developed for a new DARPA program called Short-Range Independent Microrobotic Platforms (SHRIMP). Under SHRIMP, the bug-sized bots will be tested for deploying in locations that are difficult for people to navigate, or are dangerous or inaccessible to humans, according to the statement. [Humanoid Robots to Flying Cars: 10 Coolest DARPA Projects]

SHRIMP will research and develop novel solutions for powering small robots, and will investigate new materials that could improve the robots' performance without significantly increasing their size or heft. And to test how well the robots can perform, SHRIMP will put them through their paces in "an Olympic-style evaluation," with performances demonstrating their maneuverability, dexterity and mobility, according to the statement.

One of the "sports" categories for the bots will test untethered actuator-power systems, showing how high and how far the robot can jump, how much weight they can lift, how far they can throw objects and how they perform in a tug of war.

The other category is for complete robot designs: The tiny bots will be evaluated on rock piling, climbing a vertical surface, navigating an obstacle course, and performing in a biathlon.

Robots competing in DARPA's robo-lympics may be small, but their minuscule size will allow them to perform important tasks that are off-limits to larger robots. And discoveries    that make the tiny robots more powerful and agile could be applied to other areas where the use of robotics is currently constrained by their size or bulkiness — "from prosthetics to optical steering," Ronald Polcawich, a DARPA program manager in the Microsystems Technology Office, said in the statement.

Robot proposals are due Sept. 26, and the testing period is estimated to kick off in March 2019, according to the project website.