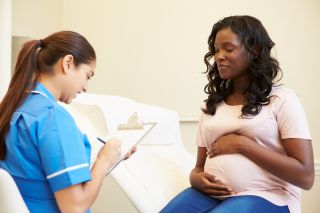 Women who are pregnant may not spend much time worrying about their own hearts, but a new study suggests that the risk of having a heart attack during pregnancy or within six months of giving birth is on the rise in the U.S.

Although the overall risk of a pregnant woman having a heart attack is low, the findings show that even young women are susceptible to heart disease, said lead author Dr. Nathaniel Smilowitz, an interventional cardiologist at NYU Langone Health in New York City. (Heart disease increases a person's risk of having a heart attack; heart attacks occur when blood flow to part of the heart muscle is reduced because of a blood vessel blockage.) [Blossoming Body: 8 Odd Changes That Happen During Pregnancy]

Indeed, there are many changes taking place in a woman's body during pregnancy that may make her more vulnerable to heart disease, Smilowitz told Live Science. For example, the amount of blood in the body increases, and substantial hormonal changes can put more stress on blood vessels. In addition, pregnancy can be a stressful time for women both emotionally and physically, and this stress can bring about heart complications. (Smilowitz added that risk may remain elevated postpartum because it takes some time for a woman's body to return to its pre-pregnancy state.)

In the study, published today (July 18) in the journal Mayo Clinic Proceedings, the researchers looked at health insurance claims from a large national database of U.S. hospitals collected between 2002 and 2014. In particular, they analyzed claims from women ages 18 and older who were hospitalized during pregnancy, delivery or in the six weeks after giving birth.

Of the more than 55 million pregnancy-related hospitalizations during this period, the study found that nearly 4,500 women had heart attacks during pregnancy, childbirth or in the six weeks after delivery. Around 200 women died after having a heart attack, according to the findings.

It was surprising to find that the death rate among these women was almost 5 percent, which is a high mortality rate in what is considered a low-risk population for heart disease, Smilowitz said.

The risk of heart attack was also higher among pregnant women who had diabetes, high blood pressure or elevated lipid levels, as well as among those who were smokers, which are all known risk factors for heart disease.

It's worth noting that the study found increasing rates of heart disease in pregnant women during a decade when there have been advances in cardiovascular risk reduction and improved treatments, Smilowitz said. One possible explanation for the upward trend is that women are having children later in life, he said. Another possibility is that rates of obesity and diabetes — both risk factors for heart disease — are increasing in women of childbearing age, he said. [Are You Pregnant? 10 Early Signs of Pregnancy]

One of the limitations of the study is that the data did not indicate which trimester of pregnancy the heart attacks occurred.