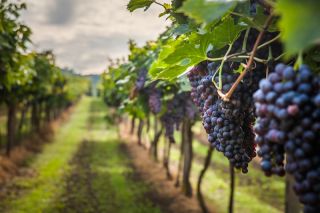 When grape harvesters at a German winery mysteriously fell ill with "rabbit fever," a rare bacterial illness, one question in particular stood out: How did they get sick?

After a lengthy investigation, officials had an answer: It was the grapes.

Rabbit fever, or tularemia, is a serious illness caused by the bacterium Francisella tularensis, which infects animals such as rodents, rabbits and hares, according to the U.S. Centers for Disease Control and Prevention (CDC). It's rare in the United States, with only a few hundred cases reported per year, and also rare in Germany. People can contract the disease through tick bites, from handling infected animals or by consuming contaminated food or water. [10 Bizarre Diseases You Can Get Outdoors]

In the German cases, which occurred in October 2016 in the southwestern state of Rhineland-Palatinate, six harvesters became ill, with symptoms including fever, chills, difficulty swallowing, swollen lymph nodes and diarrhea, according to a new report of the outbreak published Wednesday (July 11).

The workers tested positive for F. tularensis, and their symptoms suggested they had become ill from eating or drinking something contaminated with the bacteria, not from a tick bite. (When people get tularemia through tick bites, they usually develop skin ulcers at the site of the bite, where the bacteria entered the body, according to the CDC.)

What's more, the workers didn't have any of the typical risk factors for the disease, such as having hunted or eaten infected animals, the report said.

So, health officials conducted a study to figure out which activities at the winery were linked with the illness. They found that, compared with workers who didn't get sick, those who developed tularemia were much more likely to have engaged in one particular activity: drinking "grape must," or juice from crushed grapes that contains the skin, seeds and stems. (Preparing grape must is one of the first steps in winemaking.)

In particular, the workers who got sick drank grape must made from a batch of grapes that had been harvested by a machine, rather than picked by hand.

The researchers found genetic traces of F. tularensis bacteria in the unfinished wine made from this machine-pressed grape must, the report said.

"To our knowledge, [this] is the first outbreak of tularemia linked to grape must," said senior author Dr. Philipp Zanger, an infectious-disease specialist at University Hospitals in Heidelberg, Germany, and an epidemiologist at the Federal State Agency for Consumer and Health Protection in Rhineland-Palatinate.

The researchers also found genetic traces of field mice in the unfinished wine made from the grape must. They suspect that an infected mouse may have been collected by the mechanical harvester and pressed with the grapes.

"This outbreak suggests that mechanical harvesting can be a risk factor for the transmission of zoonoses [diseases from animals] such as tularemia," the report said.

Zanger told Live Science that the report highlights the need to be cautious when consuming raw, untreated food products like grape must.

But what about the wine? Zanger said that, based on experiments that he and his colleagues conducted, there's no evidence that tularemia bacteria can survive in finished wine products. But as a precaution, the contaminated products at this winery were confiscated, and their sale was prohibited, the report said.