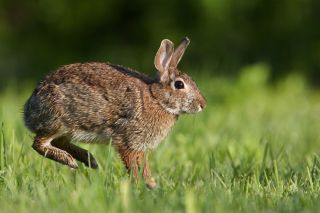 The bacteria that cause tularemia, also called rabbit fever, can infect rabbits as well as humans.
(Image: © Tom Reichner / Shutterstock.com)

A surge in cases of a serious but rare bacterial disease called rabbit fever in four U.S. states has doctors puzzled.

Over the past two decades, about 125 yearly cases of the disease, also referred to as tularemia (named after Francisella tularensis, the bacterium that causes it), have been reported in the United States. But already this year through September, there have been 100 cases in just four states, according to a report released today (Dec. 3) by the Centers for Disease Control and Prevention (CDC).

Those cases involved people ages 10 months to 89 years in Colorado (43 cases), Nebraska (21), South Dakota (20) and Wyoming (16). One man, who was 85, died from the disease, and 48 others were hospitalized, according to the report. [The 9 Most Bizarre Medical Conditions]

"This was something we noticed happening here in Nebraska, and when we contacted our colleagues in neighboring states, they were having similar experiences," Dr. Caitlin Pedati,of the Nebraska Department of Health and Human Services and the CDC and lead author of the report, told Live Science. Health authorities in Colorado, South Dakota and Wyoming were also noticing more cases of this infection, but other states beyond those were not showing this kind of increase, she said.

The disease can be life-threatening, but it is generally treatable with antibiotics, according to the CDC. The bacteria that cause the disease infect animals such as rabbits, hares and rodents, as well as humans. People can become infected by getting bit by ticks, touching an infected animal, drinking contaminated water or even breathing in contaminated aerosols, the CDC says.

The symptoms often depend on how the bacteria got into the person's body, Pedati said.

For example, a hunter who gets sick from handling an infected rabbit, possibly by skinning the rabbit without wearing gloves, may show skin ulcers and swollen lymph nodes. But a landscaper who mowed over a dead infected animal, breathing in the bacteria in the resulting aerosolized particles, would show throat and lung problems if he were to get sick, Pedati explained.

Symptoms of a tularemia infection usually show up three to five days after exposure to the bacteria, though it could take longer, according to the report. In general, symptoms could include fever and chills with muscle or joint pain, a cough or trouble breathing, skin ulcers (where the bacteria entered the body), pink eye, stomach pain with vomiting and diarrhea, and pharyngitis (sore throat) if the bacteria are ingested, according to the report.

The authors of the new report aren't sure what has caused the recent rise in cases. However, increased rainfall, which can fuel vegetation growth and the accompanying rise in hungry rodents and rabbits, as well as heightened awareness and testing, could be possible explanations, they noted.

The researchers urged heath care workers and residents of the currently affected states to be aware of the risk. "Health care providers should be aware of the elevated risk for tularemia within these states and consider a diagnosis of tularemia in any person nationwide with compatible signs and symptoms," the researchers wrote in the CDC report. "Residents and visitors to these areas should regularly use insect repellent, wear gloves when handling animals, and avoid mowing in areas where sick or dead animals have been reported."

Tularemia is considered by some experts to be one of the five diseases, which include anthrax, with the greatest potential for use in biological warfare, according to a review of research studies published March 5 in The New England Journal of Medicine.