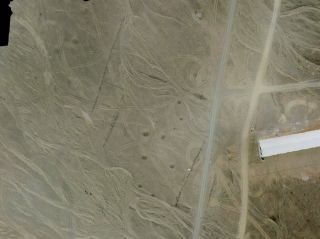 More than 3,000 years ago in what is now the lower Chao Valley in Peru, ancient people created five geoglyphs out of angular rocks, forming designs that may have shown heavenly constellations.

These geoglyphs had stone doorways leading into them. Archaeologists believe that ancient people would have entered these doorways to participate in some form of ceremony or ritual activity performed at the geoglyphs.

These five geoglyphs are part of a much larger ceremonial landscape now called Pampa de las Salinas that consistsof more than 20 archaeological sites, including trails, plazas and a massive mound called "Los Morteros" that consists of the remains of ancient buildings as well as fish and plants.[Amazing Photos of the Mysterious Geoglyphs in Peru]

Recently, archaeologists have been mapping and excavating Pampa de las Salinasin an effort to help understand the landscape's mysteries.

"It seems that the area [Pampa de las Salinas] became the place where ceremonial sites were built and used by nearby communities," said Ana Cecilia Mauricio, an adjunct professor at the Pontificia Universidad Catolica del Peru, who is leading a new investigation in the area.

Even so, the scientists said they are puzzled over the meanings of the structures located at Pampa de las Salinas and are not sure what exactly went on at the site so many years ago.

The sprawling designs may depict the heavens. One of the geoglyphs, found in the 1970s, depicts an astronomical constellation known as the Southern Cross, and "it is likely that the other geoglyphs are associated with constellations, although we haven't [made] this interpretation yet since we are still recording them," Mauricio said. [Photos: Ancient Circular Geoglyphs Etched into the Sand in Peru]

The researchers aren't sure exactly when the geoglyphs were constructed, though they likely date back more than 3,000 years, because all the sites in the Pampa de las Salinas stopped being used by that time, Mauricio said.

Her team didn't find any artifacts on the surface of the geoglyphs, something that makes it harder to date the geoglyphs. Next, the researchers plan to use thermoluminescence dating, in which the amount of trapped energy is measured, on sediments associated with the geoglyphs to get a better idea of how old the structures are.

The oldest site in the Pampa de las Salinas is the Los Morteros mound, which dates back at least 6,000 years.

"Our research indicates that the oldest phases of Los Morteros are related to the formation of a mound through accumulation of organic refuse — marine fauna and plant remains — in spaces with clay surfaces and stone hearths, probably household spaces," Mauricio said. "Later, adobe brick architecture and then stone architecture, both with monumental and ceremonial characteristics, were built at Los Morteros."

People lived at the site when Los Morteros was constructed. But "later, when the site became monumental, there is no evidence of population living in Morteros or even in the whole area of Pampa de las Salinas," said Mauricio. Ultimately, Los Morteros ceased to be used 5,000 years ago, "and ceremonial activities were concentrated in other sites" at Pampa de las Salinas, she said.

Mauricio, who presented the team's work in April at the Society for American Archaeology annual meeting, said the team will continue studying the site in an effort to unravel its mysteries.