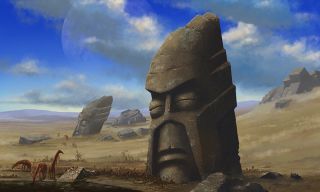 Did climate change already kill all the aliens we've been searching for?

According to astrophysicist Adam Frank, it's certainly a possibility — and whether humans are doomed to the same fate may already be out of our hands.

Frank, a professor of physics and astronomy at the University of Rochester in New York, is the lead author of a new paper published May 1 in the journal Astrobiology that aims to take what Frank calls a "10,000-light-year" view of anthropogenic (human-caused) climate change. Using mathematical models based on the disappearance of a real-life lost civilization here on Earth (the former inhabitants of Easter Island), Frank and his colleagues simulated how various alien civilizations might rise and fall if they were to increasingly convert their planet's limited natural resources into energy. [12 Possible Reasons We Haven't Found Aliens]

"The laws of physics demand that any young population, building an energy-intensive civilization like ours, is going to have feedback on its planet," Frank said in a statement. "Seeing climate change in this cosmic context may give us better insight into what's happening to us now and how to deal with it."

The results, as you might expect, were generally pretty grim. Of four common "trajectories" for energy-intense civilizations, three ended in apocalypse. The fourth scenario — a path that involved converting the whole alien society to sustainable sources of energy — worked only when civilizations recognized the damage they were doing to the planet, and acted in the right away.

"The last scenario is the most frightening," Frank said. "Even if you did the right thing, if you waited too long, you could still have your population collapse."

For Frank, the path to modeling an apocalypse starts with Easter Island.

"Easter Island presents a particularly useful example for our own purposes since it is often taken as a lesson for global sustainability," Frank and his colleagues wrote in the paper. "Many studies indicate that Easter Island's inhabitants depleted their resources, leading to starvation and termination of the island's civilization."

Working from previous equations that modeled the fall of Easter Island's population alongside the depletion of its resources, the team found four possible end points for a hypothetical alien civilization similarly constrained by limited natural resources.

"The first trajectory we found is what we call the die-off," Frank said.

In this scenario, the civilization's population skyrockets over a short period of time, and as the aliens guzzle energy and belch out greenhouse gases, the planet's temperature spikes, too. (In this study, temperature was used to represent human-made impacts on the planet's habitability via greenhouse gas pollution.) The population peaks, then suddenly plummets as rising temperatures make survival harder and harder. The population eventually levels off, but with a fraction of the people who were around before. [Doomsday: 9 Real Ways the World Could End]

"Imagine if seven out of 10 people you knew died quickly," Frank said. "It's not clear a complex technological civilization could survive that kind of change."

The second scenario is sustainability. Here, both the planet's population and its global temperature climb rapidly but then level off when the civilization recognizes how its resource management is affecting nature. To reach an equilibrium, Frank said, the population would need to switch from resources that take a high toll on the planet (like oil) to more sustainable resources (like solar energy). Civilization is saved!

Both the third and fourth scenarios are called "collapse." Here, as in the "die-off" scenario, both the planet's population and the planet's temperature rise dramatically over a short period. But this time, when people start dying from a lack of basic resources, there are no survivors. Whether a civilization merely dies off or totally collapses depends on how sensitive the environment is and how quickly it responds to rising populations.

Even if the civilization realizes it's damaging the environment and makes attempts to switch to sustainable resources — a scenario called "collapse with resource change" — it's too late. The civilization might see a temporary slowing in the population decline, but eventually, it drops to zero anyway. The damage is done; civilization is doomed.

The difference between a sustainable future and a deadly collapse was largely dependent on a population's foresight — how soon they realized they were destroying their planet, and how quickly they took action. According to Frank, this difference should motivate humans to take climate change seriously.

"Across cosmic space and time, you're going to have winners — who managed to see what was going on and figure out a path through it — and losers, who just couldn't get their act together and their civilization fell by the wayside," Frank said.

"The question is, which category do we want to be in?"