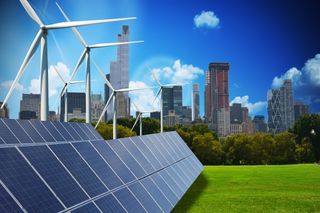 Scientists have published a detailed road map to move 139 countries to 100 percent renewable energy by 2050, according to a recent study.

Energy experts at Stanford University reported that using wind, solar, geothermal and water (hydropower, tidal and wave) energy to electrify all economic sectors that need power to operate — including the electric grid itself, transportation, heating and cooling, industrial, and the agriculture, forestry and fishing industries — would significantly reduce energy consumption, decrease deaths from air pollution, create millions of jobs, stabilize energy prices and save trillions of dollars on health care and climate-related costs.

"We have individual plans for each of the 139 countries, and these represent more than 99 percent of all of the emissions worldwide," Mark Jacobson, director of Stanford University's Atmosphere and Energy program, told Live Science. [Top 10 Craziest Environmental Ideas]

The study looked at the world's energy needs, beginning with 2012 and projecting out to 2050. In 2012, the world used 12.105 terawatts (TW) of energy, which is equal to 12.105 trillion watts. By 2050, the world will need 20.604 TW if nothing changes and every country continues with the same approach it currently uses to meet energy demand, the researchers wrote in the study.

But if those same business sectors were to turn to renewable energy sources to electrify their all of their power requirements, the world would need just 11.804 TW to meet global power demands, according to the study. This is because electricity is more efficient than combustion, according to the researchers.

In a video explaining the main points of the study, Jacobson offered an example: In an electric car, he said, 80 to 82 percent of the electricity used goes toward moving the car; the rest is wasted as heat. In a gasoline-powered vehicle, on the other hand, only 17 to 20 percent of the energy in the fuel goes toward moving the car, and the rest is wasted as heat, he said.

Energy is also needed to mine, refine and transport fossil fuels. As such, switching to 100 percent renewable energy would eliminate these energy-intensive and environmentally destructive processes, the report authors said.

Road map for the future

In their study, Jacobson and his colleagues show how wind, water, geothermal and solar power can meet the worldwide demand for 11.804 TW of energy while avoiding the predicted global temperature increase of 2.7 degrees Fahrenheit (1.5 degrees Celsius) above preindustrial levels by 2050. The researchers outline how doing so would save the lives of 4 million to 7 million people who might have otherwise died from diseases caused by air pollution, save countries more than $20 trillion overall in health and climate costs, and produce a net increase of more than 24 million long-term jobs.

"It seems like a no-brainer to me," Jacobson told Live Science.

The study builds on previous work from Jacobson, who began his career as a research scientist trying to understand how air pollution affects the climate. He said that in the early years, he focused on the problems, but by around 1999, he started looking at solutions.

In 2009, Jacobson and Mark Delucchi, a research scientist at the Institute of Transportation Studies at the University of California, Berkeley, published a study in Scientific American that outlined a plan to power the world with 100 percent renewable energy.

In the ensuing years, Jacobson and Delucchi worked on follow-up studies that examined these issues at the state level, and the researchers have now expanded that research to 139 countries. Detailed energy data for the remaining 59 countries in the world did not exist and thus could not be included in the study, the scientists said.

Jacobson said that, when averaged over all countries, the cost of building renewable energy systems, including storage and transmission, is 8.9 centsper kilowatt-hour (kWh). In a world that doesn't transition and keeps the current fossil-fuel system, the cost is 9.8 cents/kWh.

And that doesn't include the cost to society.

And if the world takes no action to address climate change and ice continues to melt at Earth's poles at the current pace, 7 percent of the world's coastlines will be underwater, Jacobson said.

Jacobson said the total societal cost of renewable energy — which includes the cost of health and climate issues, as well as the direct cost of energy for wind, water and solar power — is about one-fourth that of fossil fuels.

"In other worlds, you reduce the total cost to society by about 75 percent," he said. "The cost benefits of this are huge."

So far, the United States has just 4.2 percent of its total electricity generated by renewable sources. But the country has an advantage, according to the researchers. The study found that countries like the U.S., with more land per population size, would have the easiest time making the transition. Countries expected to have the most difficult time are those that are small, geographically, but have very large populations. Countries such as Singapore, Gibraltar and Hong Kong will have the biggest challenges transitioning to 100 renewable energy, according to Jacobson.

Still, there are ways to solve the problem, he said. These regions could turn to offshore wind energy, or they could exchange energy with a neighboring country, he added.

"With this information, we're giving confidence to countries that they can be self-sufficient," Jacobson said. "I'm hoping that different countries will commit to 100 percent renewable energy [by 2050] and 80 percent by 2030."

The study was published online Aug. 23 in the journal Joule.