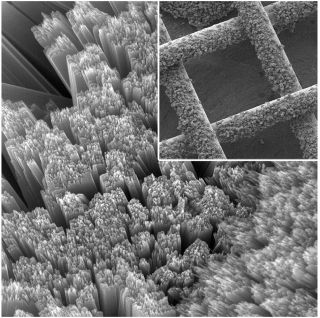 A scanning electron microscope image of a piece of mesh solar panel that was used to develop a new solar battery. The device combines the energy-capturing abilities of a solar cell with the energy-storing capabilities of a battery.
(Image: © Yiying Wu, Ohio State University)

A new kind of solar cell could store electrical energy without any help from traditional batteries, according to a new study.

Researchers at Ohio State University, in Columbus, have developed what they're calling the world's first solar battery — a hybrid device that combines the energy-capturing abilities of a solar cell with the energy-storing capabilities of a battery.

The new cell could lower the cost of harvesting renewable energy from the sun by as much as 25 percent, according to the researchers. [Top 10 Craziest Environmental Ideas]

The key to the device's success is a mesh solar panel that allows both sunlight and air to enter the cell. This porous material represents a departure from the solid semiconductor materials typically used to make solar cells. Allowing both light and oxygen into the cell enables the chemical reactions that typically occur inside a battery to occur within the solar cell itself.

"The state of the art is to use a solar panel to capture the light, and then use a cheap battery to store the energy," lead researcher Yiying Wu, a professor of chemistry at Ohio State, said in a statement. "We’ve integrated both functions into one device. Any time you can do that, you reduce cost."

But this innovative device can do more than just lower the cost of renewable energy, Wu said. It can also help solve a problem that's been plaguing scientists for years: how to store energy from the sun without losing a lot of that energyin the process.

This high efficiency is possible because the conversion of sunlight to electric current isn't happening inside the solar cell before being transferred to the battery. Since the battery is located inside the cell, electrons are not able to escape, the researchers said.

When the battery is in use — a phase known as "discharge" — the lithium metal and porous carbon electrodes are connected to an external circuit. Lithium ions can then travel to the carbon electrode and form lithium peroxide. This chemical process drives an external electrical current, Wu told Live Science in an email.

To recharge the solar battery, light hits the mesh panel and generates electron-hole pairs, which can carry an electrical charge. One of the most important features of the device is that it uses added molecules, known as redox shuttle additives, to transfer these charges from the mesh solar panel to the lithium electrode, where they cause the lithium peroxide to decompose into oxygen and lithium ions.

The oxygen is released out of the cell, but the lithium ions, as well as electrical charges, are stored inside the battery in the lithium electrode, Wu said.

“Basically, it's a breathing battery,” he said. “It breathes in air when it discharges, and breathes out when it charges.”

The researchers are still experimenting with other ways to improve the design of their solar battery, a project that is funded by the U.S. Department of Energy. The study outlining the new battery was published in the Oct. 3 issue of the journal Nature Communications.