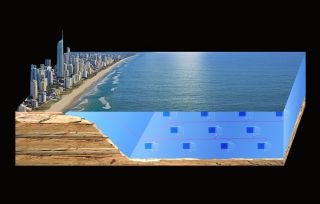 A new technology that harnesses the power of ocean currents could provide a clean and limitless form of renewable energy, some scientists say.

A group of scientists and engineers who describe themselves as "nerds in wetsuits and flippers" has launched a crowdfunding campaign, called Crowd Energy, to do just that. Their idea is to use giant underwater turbines to capture the energy from deep-ocean currents, such as the Gulf Stream off the coast of Florida.

While energy generated from these turbines may not be able to completely replace fossil fuels, as the group claims, the devices could still be an important source of clean energy, experts say. [See images of ocean turbine prototypes]

Ocean currents are one source of natural energy that no one has tapped before, either because they weren't aware of it or didn't have the technology to capture it, said Todd Janca, founder of Crowd Energy, and the man behind the idea to develop ocean turbines.

Of course, the notion of using underwater turbines to harness energy from deep-ocean currents raises concerns over the potential environmental impacts. While the system is designed to minimize the threat to marine life, in-ocean studies must be done to investigate the potential effects.

The Crowd Energy project grew out of a desire to find a source of limitless clean energy, as an alternative to fossil fuels and nuclear energy.

Most people are familiar with solar or wind power, but "what we're looking at is capturing energy most people have never seen," Janca told Live Science. While wind and solar are promising, they are limited by their quality and consistency, he said.

Janca previously worked with manned submersibles, where he said he spent most of his time fighting to keep the submersible in one place near the seafloor because the currents were so strong. He thinks he can harness these undersea torrents to generate energy that can be piped ashore.

Other companies, such as General Electric, have attempted to adapt wind turbines for use in the ocean, but these are designed to capture low-density energy carried by air, not high-density energy from ocean currents. Crowd Energy aims to take a different approach.

Janca and his colleagues developed a system called the "ocean energy turbine" that rotates much more slowly than a wind turbine, but generates a lot more rotational force, or torque.

Crowd Energy's turbine consists of three sets of blades that resemble window shutters. These structures are designed to close when water flows in the same direction the blades are moving and open when water moves in the opposite direction. The force of the water turns the blades and makes the shaft rotate, and a generator converts this rotational energy into electricity. These turbines could supply coastal communities, and possibly feed into inland areas as well.

The turbine could also be used to produce drinkable water from seawater by reverse osmosis, a method of purifying water by pumping it through a filtered membrane, Janca said. [Top 10 Craziest Environmental Ideas]

Janca plans to build a production-scale turbine with a 100-foot (30 meters) wingspan (and ultimately, much larger ones). Janca estimates that one of these turbines could generate 13.5 megawatts of electricity — enough to power 13,500 high-use American homes, he said.

In comparison, a wind turbine with rotor blades that measure 155 feet (47 meters) across generates about 600 kilowatts of electricity, but for about 10 hours a day, Janca said — enough to power only 240 homes. Suffice it to say, there's a lot of energy under the waves.

Estimates of how much energy an ocean turbine can produce are based on ideal-world conditions, Janca said, "but at the moment it is all the data we have available until we do real-world testing on a production scale turbine." As such, it's not yet possible to compare the cost of the ocean technology to a wind system until the team can build and install a production prototype, he said.

Tapping the energy of ocean currents is a promising idea, but it's not going to replace fossil fuels, said Andrea Copping, a marine and hydrokinetic energy researcher at the U.S. Department of Energy's Pacific Northwest National Laboratories in Sequim, Washington. Ocean turbines should be part of an "all-of-the-above" approach, along with other sources of renewable energy, she told Live Science.

"If you could take care of South Florida's [energy] needs, that would be fabulous," Copping said. "But you're not going to cover the grid." These are going to be regional solutions, she added.

But as with any technology deployed in nature, the potential environmental impacts need to be considered.

First, do no harm

Because ocean currents affect global weather systems, some have expressed concern that turbines may interfere with these patterns. But that's not likely to be an issue, Janca said. Putting one of these turbines in the Gulf Stream would be like "throwing a pebble in the Mississippi [River]," he said. "You can't build enough of them to cause a problem."

The main concern is how the turbines could affect nearby marine ecosystems. The turbines would be located at depths of 300 feet (91 meters) or more, in areas of fast-moving water where not many things live. Off Florida, the main animals to worry about are sea turtles and marine mammals such as whales, Copping said.

In reality, the sensory systems of these animals are good enough to detect and avoid the turbines, Copping said. In addition, the blades themselves would be slow moving and have gaps large enough for most creatures to swim through. Still, it's impossible to know exactly what the impact of these systems will be without testing them at sea. "We're right at edge of not being able to do much without getting stuff in the water," she said.

Janca and his colleagues plan to test their turbine prototype at Florida Atlantic University in Boca Raton. Next, they plan to build a larger prototype to evaluate at the university's open ocean testing site, located off the coast of South Florida. Their goal is to have four full-scale turbines working and generating power by 2015, according to the group's website.

Ocean energy is still in its infancy in the United States, but the Maine company Ocean Renewable Power installed its first underwater turbine in 2012, and plans to add two more in the next 18 months, Fast Company reported.

Meanwhile, Scotland has also made strides in generating energy from the ocean. The northern U.K. country has been a pioneer in harnessing wave and tidal energy, and is looking at using these systems on an industrial-scale.

For example, the company Scottish Power tested a 100-foot (30 meters) underwater turbine in ocean waters off the Orkney Islands in 2012, CNN reported. The giant turbine produced one megawatt of electricity, enough to power 500 Scottish homes, the company said (though still only a fraction of what Crowd Energy estimates their turbines will generate). If all goes well, the company plans to build a fleet of turbines off the Scottish coast.