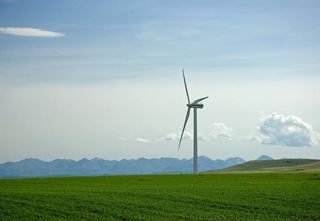 Wind energy might be the simplest renewable energy to understand. Yet there are misconceptions about what makes the wind industry turn.

The United States now has nearly 17,000 megawatts of wind power installed, which can supply about 1.2 percent of the nation's demand for electricity, according to a recent report from the Department of Energy (DOE).

With these numbers projected to grow in the coming years, it might be good to be aware of a few myths that are blowing in the wind.

No one owns the wind, so it might seem like wind energy should cost less than other technologies that require costly fuel, such as coal or natural gas, to operate.

However, the initial investment for wind energy is high. Large scale wind turbines cost a few million dollars per megawatt to put up, which at face value appears competitive with new coal-fired power plants, but the wind doesn't always blow. In effect, wind turbines typically only produce electricity about 30 percent of the time, so it takes longer to pay back the building costs.

Taken together with government incentives and maintenance costs over a turbine's 20-year lifetime, wind energy ends up costing about 4 cents per kilowatt-hour, according to DOE estimates. That's slightly more than coal, but the two are getting closer all the time.

2. America is way behind the rest of the world

Denmark gets 20 percent of its energy from wind. Germany has the most wind turbines of any country. China is set to nearly double its wind energy capacity in just one year.

You might think the United States is dragging its heels, but in terms of the raw total, America produces more wind energy than any other country (thanks to it being windier here than in Germany).

And more investment is on the way.

One recent headline grabber is the world's large wind farm project in Pampa, Texas, proposed by oil magnate T. Boone Pickens. This is part of the so-called Pickens Plan to invest $1 trillion on wind turbines throughout the wind corridor from the Dakotas down to the Texas panhandle.

Wind turbines used to be loud, but newer designs are less so.

Some of the bad rap about noise can be attributed to a single wind turbine constructed in 1978 outside of Boone, N.C., which generated low-frequency sound waves that rattled windows and made some people sick in nearby homes.

Since then, most new rotors turn slower and are mounted in front of (not behind) their towers. These and other changes have dramatically lowered the noise, said Pat Moriarty of the National Renewable Energy Lab in Golden, Colo.

Still, some neighbors complain, and the wind industry continues to search for even quieter designs.

This one is actually true, but the problem is not as bad as some people claim.

The impression that all turbines are dangerous to birds comes from Altamont Pass Wind Resource Area in California. This was one of the first big wind farms, and unfortunately it was placed in a migratory bird pathway, Moriarty said.

In addition, Altamont's 4,800 small wind turbines — many installed in the early 80s — have rotors low to the ground and packed close together, which may be why more than 1,000 birds (half of which are raptors) die there each year.

Newer wind farms report fewer bird deaths probably because the turbines are taller and spread further apart. And for comparison's sake, studies show that many more birds die colliding with cars and buildings than die in turbine blades.

5. Any house can own a windmill

Unless you have a good chunk of land around your house, it's probably not a good idea to get a wind turbine. If it's too close to buildings or trees, the wind will be turbulent and won't produce the power that it's supposed to.

But what do we know. The small wind turbine market grew by 14 percent in 2007. Some of these are for boats, but others supply homeowners who live off the grid.