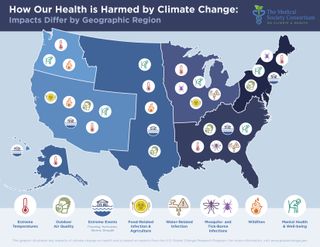 Climate change is poised to affect the health of Americans in every part of the country, a new report says.

The report, published today (March 15), comes from a new group made up of 11 medical organizations, including allergists, pediatricians, infectious-disease doctors, OB/GYNs and gerontologists.

"Doctors in every part of our country see that climate change is making Americans sicker," Dr. Mona Sarfaty, the director of the new group, called the Medical Society Consortium on Climate and Health, said in a statement. [5 Ways Climate Change Will Affect Your Health]

In the report, the researchers identified the specific health effects from climate change that will affect each region of the U.S, and created a map to illustrate this. For example, the map shows that people in the Midwest will face an increasing risk of infectious diseases carried by ticks. Meanwhile, air pollution from a growing number of wildfires will increasingly affect the health of those on the Great Plains.

And while some groups of Americans — including children, student athletes, pregnant women, the elderly, people with chronic illnesses and allergies and the poor — have a higher risk of health problems from climate change than others, the report found that people in every region of the country will be affected. Here's how.

Three aspects of climate change will directly harm peoples' health, according to the report.

Perhaps the most of obvious of the three is changing temperatures. "Climate change is causing more very hot days, greater humidity, and longer, hotter and more frequent heat waves," the authors wrote in the report. Extreme heat can cause deadly heat-related illnesses, such as heat stroke, as well as make certain chronic conditions such as heart disease worse, according to the report.

Extreme heat can affect Americans in every region of the continental United States, as well as Alaska, according to the report. And it's not just people who spend a lot of time outdoors who are at risk: Young children, older adults and people taking certain medications are also at risk because they cannot regulate their body temperature as well, according to the report. [Roasting? 7 Scientific Ways to Beat the Heat]

Another direct health harm comes from extreme weather events, which are increasing in frequency and severity due to climate change, according to the report. These include heavy downpours, floods, droughts and major storms.

Although extreme weather events threaten everyone in their path, they're particularly harmful for children, the elderly, the poor and the disabled, according to the report.

The Americans who face the greatest risk of these extreme weather events include those living in the Northeast, the Southeast, the Great Plains, the Southwest and Hawaii, according to the report.

Other health effects of climate change are a little subtler; that is, you won't spot them in the weather forecast or see them as clearly as you might see a smoggy skyline.

The increasing global average temperatures associated with climate change also contribute to the spread of infectious diseases, according to the report. As the weather warms, disease-carrying mosquitoes, ticks and fleas can survive in new regions that were previously too cold for them to inhabit, the authors wrote. Lyme-disease-carrying ticks, for example, are now found in 46 percent of all U.S. counties, compared with 30 percent in 1998, according to the report.

Other pests, such as the mosquitoes that carry viruses, including the West Nile virus and the virus that causes dengue fever, are also becoming more common in America, according to the report. The researchers noted that people in the Midwest are increasingly at risk of tick-borne infections, and people in the Southeast and Northeast are facing a growing risk of mosquito-borne infections.

Climate change can also lead to contaminated water, according to the report. Higher water temperatures, heavy downpours, rising sea levels and flooding can cause drinking water, recreational water, fish and shellfish to become contaminated with germs or chemicals, they wrote.

The contamination can stem from many sources, such as waste entering the water supply after a flood, or higher water temperatures leading to toxic algae blooms, the researchers wrote in the report. People living in the Midwest and the Southeast are at greater risk for water-related infections.

Foodborne illnesses are known to increase in the summer, because heat increases food contamination, and so climate change is expected to also increase foodborne illnesses in the U.S., the researchers wrote. For example, the heavy rainfall and flooding that are more common during warmer weather can spread more bacteria and viruses to farms where food is grown. And, warmer water temperatures can cause more germs and heavy metals to be found in seafood, they wrote. [Top 7 Germs in Food that Make You Sick]

People living in the Southwest and Midwest are at risk of an increase in food contamination with climate change, according to the report.

Threats to mental health and well-being

For example, extreme weather events can cause depression, anxiety and post-traumatic stress disorder, according to the report. Disasters are also linked to an increased risk of drug or alcohol abuse, the researchers added.

Another threat to well-being comes from the effects climate change can have on our food supply, according to the report. Higher levels of carbon dioxide in the atmosphere have been linked to lower levels of nutrients, such as minerals, in certain crops, the researchers wrote. In addition, higher temperatures can lead to food spoilage and drought can disrupt food production, and lead to generally worse levels of well-being, according to the report.

Every region in the continental U.S. is at risk of more mental health problems and threats to well-being  from climate change, according to the report.