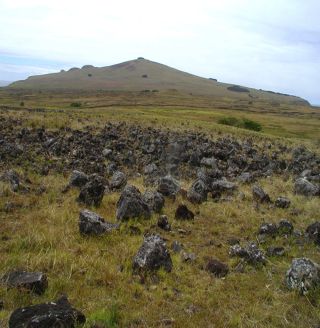 The downfall of Easter Island may have had more to do with preexisting environmental conditions than degradation by humans, according to a new study of the remote speck of land made famous by its enormous stone-head statues.

Easter Island, also known as Rapa Nui, was first settled around A.D. 1200, and Europeans landed on its shores in 1722. The circumstances surrounding the collapse of the indigenous population of Rapa Nui are hotly debated both in academia and popular culture. Scientist and author Jared Diamond argued in his 2005 book "Collapse: How Societies Choose to Fail or Succeed" (Viking Press) that prior to European contact, the indigenous people of the island degraded the environment to the extent that they could no longer thrive.

The new study suggests that Easter Island's people were, indeed, suffering before Europeans came along. The story of their downfall, however, may be less about environmental degradation than the pre-existing environmental constraints of the 63-square-mile (163 square kilometers) isle. [Image Gallery: The Walking Statues of Easter Island]

"The results of our research were really quite surprising to me," said study co-author Thegn Ladefoged, an anthropologist at the University of Auckland in New Zealand. "Indeed, in the past, we've published articles about how there was little evidence for pre-European-contact societal collapse."

The new study challenged Ladefoged and his colleagues' view. Changes on Easter Island have been well documented, archaeologically. Over time, elite dwellings were destroyed, inland agricultural fields were abandoned, and people took refuge in caves and began manufacturing more and more spear points made out of volcanic glass called obsidian, perhaps suggesting a period of war and upheaval.

The problem with pinning down the island's history, according to the researchers, is that the dates of all these events and abandonments remain murky. Going into the study, the researchers expected to find that most of the disaster occurred after Europeans arrived, Ladefoged told Live Science.

To clarify the timeline, the researchers analyzed more than 400 obsidian tools and chipped-off obsidian flakes from six sites scattered around the island, focusing in particular on three with good information on climate and soil chemistry.

Obsidian absorbs water when exposed to air. By measuring the amount of water absorption in the surfaces of the obsidian tools and flakes, the research team was able to gauge how long those surfaces have been exposed, thus revealing when the tools were made. A greater number of tools from a certain time period indicates heavier human use of that area during that time. [History's 10 Most Overlooked Mysteries]

The obsidian dates varied widely across the sites. Site 1, on the northwestern coast of the island, saw a steady increase in use between about 1220 and 1650, with a fast decline starting after 1650 — long before Europeans arrived on the island.

Site 2, an interior mountainside site, saw a rapid increase in land use between about 1200 and 1300, a slower increase until about 1480, and then constant use until a decline that started between 1705 and 1710, also before European contact. By the time Europeans came along, coastal Site 1 was at about 54 percent of its peak land use, and mountainous Site 2 was at only about 60 percent.

Site 3 told a different story. This near-coastal area saw a slow increase in human activity between 1250 and 1500, and then a faster increase until about 1690, after which settlement remained fairly constant until after European contact. In fact, the decline in use of this site didn't begin until 1850 or later, the researchers found.

The differing climates of the sites may explain the uneven decline, the researchers said. Site 1 is in the rain shadow of the volcano Ma'unga Terevaka, making it prone to droughts. Site 2 is wetter, but its soil fertility is low. Site 3, the longest-lasting spot, is both rainy and fertile.

What this means is that the people of Easter Island may have been struggling against natural environmental barriers to success, rather than degrading the environment themselves, the researchers reported Monday (Jan. 5) in the journal Proceedings of the National Academy of Sciences.

"It is clear that people were reacting to regional environmental variation on the island before they were devastated by the introduction of European diseases and other historic processes," Ladefoged said. The next step, he said, would be to take a detailed look at the archaeological remnants of dwellings on the island over time to better understand how humans and the environment interacted.