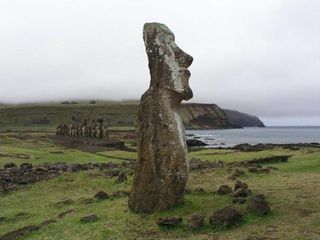 Chemical analyses of teeth from 41 human skeletons excavated on Easter Island revealed the inhabitants ate rats rather than seafood; Here, Moai statues at Ahu Tongariki on the south-eastern part of the island, where 26 of the skeletons were found.
(Image: © Photo by Amy Commendador)

The inhabitants of Easter Island consumed a diet that was lacking in seafood and was, literally, quite ratty.

The island, also called Rapa Nui, first settled around A.D. 1200, is famous for its more than 1,000 "walking" Moai statues, most of which originally faced inland. Located in the South Pacific, Rapa Nui is the most isolated inhabited landmass on Earth; the closest inhabitants are located on the Pitcairn Islands about 1,200 miles (1,900 kilometers) to the west.

To determine the diet of its past inhabitants, researchers analyzed the nitrogen and carbon isotopes, or atoms of an element with different numbers of neutrons, from the teeth (specifically the dentin) of 41 individuals whose skeletons had been previously excavated on the island. To get an idea of what the islanders ate before dying, the researchers then compared the isotope values with those of animal bones excavated from the island. [Photos of Walking Easter Island Statues]

Additionally, the researchers were able to radiocarbon date 26 of the teeth remains, allowing them to plot how the diet on the island changed over time. Radiocarbon dating works by measuring the decay of carbon-14 allowing a date range to be assigned to each individual; it's a method commonly used in archaeology on organic material. The research was published recently online in the American Journal of Physical Anthropology.

The researchers found that throughout time, the people on the island consumed a diet that was mainly terrestrial. In fact, in the first few centuries of the island's history (up to about A.D. 1650) some individuals used Polynesian rats (also known as kiore) as their main source of protein. The rat is somewhat smaller than European rats and, according to ethnographic accounts, tasty to eat.

"Our results indicate that contrary to previous zooarchaeological studies, diet was predominantly terrestrial throughout the entire sequence of occupation, with reliance on rats, chickens and C3 plants," the researchers write in their journal article, noting that the resources from C3 plants (or those that use typical photosynthesis to make sugars) would have included yams, sweet potatoes and bananas.

The islanders' use of rats was not surprising to the researchers. Archaeological excavations show the presence of the Polynesian rat across the Pacific. The Polynesian form commonly travels with humans on ocean voyages and, like any other rat, multiplies rapidly when it arrives on a new island. In some cases, the rats were probably transported intentionally to be used as food, something supported by ethnographic accounts stating that, in some areas of Polynesia, rats were being consumed at the time of European contact. Additionally, previous research has suggested the rats were at least partly responsible for the deforestation of Rapa Nui.

What was more surprising to the researchers was the lack of seafood in the diet of the islanders. "Traditionally, from Polynesian cultures you have a heavy predominance of using marine products, especially in the early phase of colonization," said Amy Commendador, of the Idaho Museum of Natural History at Idaho State University, in an interview with LiveScience.

One reason for the lack of seafood may have to do with the island's location and topography, Commendador said. The northern end contains steep cliffs and would be difficult to fish from. Additionally, the island's southerly latitude makes it somewhat cooler and may affect fishing. "Because of their geographic location and climate conditions, there just weren't as many marine products for them to get," Commendador said.

Rats should not be underestimated in their value as a resource, study co-author John Dudgeon, also at Idaho State University, told LiveScience. They could eat anything and multiply rapidly within a few generations. For the people who lived on Rapa Nui, "it was probably easier to go get a rat than it was to go get a fish," Dudgeon said.

Though the study results showed the islanders' diet was mainly terrestrial, a few individuals, dating after A.D. 1600, appeared to have been eating more fish than the others. [The 7 Perfect Survival Foods]

These fish eaters may have lived on a part of the island where the fishing was easier, Commendador suggested. Another possibility the team raises in their paper is that access to marine resources varied due to the social and political constraints people faced. For the islanders, eating fish might have been a mark of "higher status" individuals, an elite person who was allowed more plentiful access to seafood.

One curious coincidence is that most of the Moai, the statues erected by the islanders, face inland rather than out to sea. Now, this new research suggests the people of the island also turned inland, rather than to the sea, to get their food.

Commendador and Dudgeon don't think any direct relationship between the Moai statues and the islanders’ diet exists. Previous research has suggested the statues were positioned facing inland due to ancestor worship, so that the statues could watch over their descendents.

Another, more speculative, idea is that by having the statues facing inland, the islanders were also "saying we're turning inwards and not turning outward," Dudgeon said. While this probably doesn't relate to the islanders' decision to eat rats rather than fish, it shows the mindset the people of Rapa Nui may have developed before the arrival of Europeans. Their lifestyle as well as their diet may have become focused on the land rather than the sea.