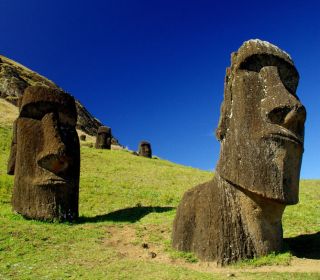 The mysterious Easter Island statues — hundreds of huge, ancient carved stone heads that guard the hilly Pacific island landscape — may actually have bodies, according to an email showing excavations at the site.

The email, which made the rounds in May 2012, contained photos of a startling excavation project at Easter Island. According to the email, archaeologists were in the process of unearthing the statues' bodies, which were gradually buried by 500-plus years of erosion.

Turns out, so many people were seeking an answer that "we were swamped by over 3 million hits and our site crashed," said Jo Anne Van Tilburg, director of the Easter Island Statue Project, which had indeed been excavating two of the statues' buried bodies since 2010. Photos of the dig posted on the project website, and older photos taken of full-bodied Easter Island statues that were excavated in the 1950s, have been collected together in the chain email, driving that past surge of interest in the excavation project, and confusion about what's real.

"The reason people think they are [only] heads is there are about 150 statues buried up to the shoulders on the slope of a volcano, and these are the most famous, most beautiful and most photographed of all the Easter Island statues," Van Tilburg, who is also a fellow at the Cotsen Institute of Archaeology at the University of California, Los Angeles, told Life's Little Mysteries. "This suggested to people who had not seen photos of [other unearthed statues on the island] that they are heads only."

In fact, archaeologists have studied the statues on the island for about a century, and have been aware of the torsos beneath the statues' heads since the earliest excavations in 1914. [The Most Monumental Monument Mistakes]

The statues, whose traditional name is "moai," were carved from volcanic rock between A.D. 1100 and 1500 by ancient Polynesians. They range in size, with the tallest reaching 33 feet (10 meters).  Although their significance is still somewhat of a mystery, the moai are thought to have been representations of the indigenous peoples' ancestors. Tribespeople would probably have carved a new statue each time an important tribal figure passed away, Van Tilburg said.

The new excavation work intends to document for the first time the complex carvings found on the buried statues' bodies, which have been protected from weathering by their burial. But the project will also help preserve the ancient monoliths, she said. "We have a team that accompanies us and they consolidate and protect the stone by applying chemicals and water repellant."