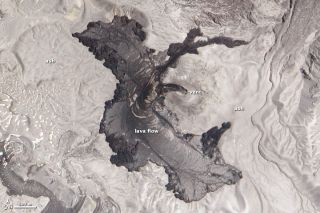 A slow-moving lava flow made of glass is still inching its way down a volcano in Chile, nearly a year after it first erupted, geologists recently discovered.

The lava is made of obsidian, or volcanic glass. Researchers visiting Chile's Puyehue-Cordón Caulle volcano in January 2013 found the obsidian flow was moving, even though the volcano stopped erupting in April 2012, NASA's Earth Observatory reported.

Puyehue-Cordón Caulle shot out a massive amount of rhyolite lava between its first eruption, in June 2011, and the last dribbles in April 2012. Because the rhyolite was very thick, dry and viscous, minerals in the lava couldn't form sizable crystals. Instead, the lava is solidified but disordered silica, like window glass.

But just as hot glass can flow, the lava continues to creep down the volcano's slopes as it slowly cools from the outside in. A thin layer of cooled glass covers the oozing glass.

"The sound of advancing obsidian lava is quite fascinating and unlike anything I have ever heard — a succession of platey fracturing sounds, as if a bowl of Rice Krispies were made up of thousands of fragile plates that each broke, rather than the usual snap, crackle and pop," volcanologist Hugh Tuffen told NASA's Earth Observatory.

Tuffen, a researcher at Lancaster University in the United Kingdom, studies the rhyolite magma at Puyehue-Cordón Caulle for clues to how eruptions work. "One of the unsolved mysteries of rhyolites is how the gas escapes from this very thick magma," he told the BBC.

Obsidian lava flows are found worldwide, near volcanoes that erupt rhyolite and other lava rich in silica. In the United States, obsidian flows are in Oregon and California.

Puyehue-Cordón Caulle volcano is in Puyehue National Park in the Andes of Chile's Ranco Province, just west of the border with Argentina.The initial eruption on June 4 hurled material 45,000 feet (13,700 meters) into the atmosphere.