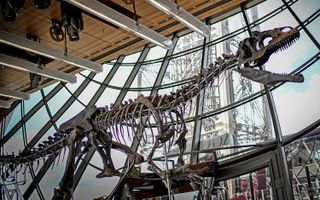 The nearly complete skeleton of a meat-eating dinosaur fetched a whopping $2.36 million at the Aguttes auction house in Paris yesterday (June 4), much to the dismay of many paleontologists.

The sale itself was legal — the dinosaur was dug up on private land in Wyoming in 2013, and the United States deems that fossils found on private land belong to the landowner, who can then legally take it out of the country.

Despite its legality, auctioning off dinosaurs is part of a growing trend that threatens to take unstudied, prize specimens away from scientists who can't afford to buy them, said P. David Polly, the president of the Society of Vertebrate Paleontology and a professor of sedimentary geology at Indiana University. [In Photos: Montana's Dueling Dinosaur Fossils]

"An auction is a device to get the highest possible price out of something," Polly told Live Science. "And, generally speaking, even big museums don't have budgets for purchasing specimens." (A big exception involves Sue, the 67-million-year-old Tyrannosaurus rex skeleton that the Field Museum of Natural History in Chicago bought for $8.4 million in 1997.)

Usually, museums and research institutions spend about $10,000 for big excavations, which covers the cost for scientists to travel to the field and dig up fossils, as well as properly excavate and prepare them, Polly said. That's more than 200 times less than what the auction buyer paid for the Wyoming dinosaur.

And therein lies the problem: If dinosaurs found on U.S. private land are sold for top dollar at auctions, then landowners might start viewing it as a business venture. These landowners might "not want to work cooperatively with scientists, but rather work with whoever will pay them to work on the land who will give them a cut [of the profit]," he said.

"If it's a trend that continues, then it's essentially really damaging to scientists because it makes it harder for scientists to have access to specimens," said Polly, who co-wrote a letter of protest on behalf of SVP's 2,200 members, asking Aguttes to cancel the auction. "It also means that we have to have more security on our own scientific collections because if people are thinking these things are worth millions of dollars, there's more incentive to break in and take them."

In 2013, the roughly 150-million-year-old Wyoming specimen was found in the Morrison Formation, an area famous for holding the fossils of late Jurassic creatures, according to the auction catalog. The nearly 30-foot-long (9 meters) dinosaur is likely an Allosaurus, the most common theropod (a group of mostly meat-eating, bipedal dinosaurs that included T. rex and Velociraptor) found in the formation. [Photos: Dinosaur's Battle Wounds Preserved in Tyrannosaur Skull]

Still, the exact species is not totally clear. "The specimen displays a series of characters that are unusual in Allosaurus, suggesting that it might belong to a new, still unnamed, taxon [group] of allosaurid theropod," Pascal Godefroit, a paleontologist at the Royal Belgian Institute of Natural Science, wrote in the auction catalog.

But Thomas Carr, a vertebrate paleontologist and an associate professor of biology at Carthage College in Wisconsin who wasn't involved in the auction, said he isn't buying that claim. "It's just hype — they're just trying to get a higher price for it," Carr told Live Science. "It looks no different from any Allosaurus that I've ever seen."

However, if it is a new species, an auction catalog is no place to make that claim, Carr said. "Where scientific knowledge claims belong is in the scientific, peer-reviewed literature," Carr said. "This situation is just really bewildering. I fail to see how doing that is ethical."

Live Science reached out to Godefroit, but he did not immediately respond to a request for comment.

Paleontologists typically don't study specimens from private collections. If the specimen's owner puts the fossil on display, but then returns it to a private collection, it won't be available for later scientific study for that verification. And researchers often double-check the work of their peers to make sure it's right.

This recently happened when researchers claimed to have found a fossil of the first four-legged snake on record. Soon after, another group of scientists who also examined the specimen argued that this analysis was incorrect, and that the creature was actually a dolichosaurid, an extinct four-legged marine lizard with an elongated, snake-like body. The creature's identity remains a mystery, however, because the specimen is privately owned, and has since been removed from public view. This means that researchers likely won't be able to study it anytime soon.

The new owner of the Wyoming specimen — an unnamed French art collector — did, in fact, say that the specimen would be lent to a museum in the future, The Guardian reported. But again, paleontologists are skeptical.

"Right now, they are claims from an unnamed person," said Lisa Buckley, the former curator and collections manager at the Peace Region Palaeontology Research Centre in British Columbia, Canada. "Actions speak louder than words, and it remains to be seen in what form that donation will occur, if it does."

There are no public records of how many dinosaurs meet the auction block, but Polly estimates it's about three to five a year at this point. If the trend continues, science could be lost or misconstrued going forward, he said. For instance, the Paleontological Resources Preservation Act protects fossils found on U.S. federal lands, but it's possible that people might dig up bones on public land and then claim the specimens came from private property, so they could legally sell them, he said.

That would be a shame, because a specimen's location helps scientists date it, as well as assess the ecosystem in which it lived. For example, researchers know that Allosaurus lived in ecosystems with other apex predators, meaning it had to compete for prey, Carr said. [Photos: Newfound Tyrannosaur Had Nearly 3-Inch-Long Teeth]

Moreover, every fossil adds to science. Given that the Wyoming specimen is about 70 percent complete, it could greatly help scientists learn how these dinosaurs changed as they grew into adulthood, Carr said.

"Selling fossils to private individuals just doesn't help science at all," Carr said. "I imagine that this [specimen] represents tens of thousands of data points lost to science. It's a true loss of information."

This isn't Aguttes' first fossil auction. In 2016, the auction house sold another Allosaurus skeletonfor $1.32 million, and last year it sold a complete mammoth skeleton for more than $641,000, according to CNN.