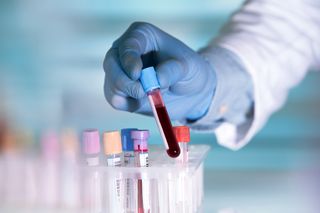 A new blood test shows promise for detecting many types of cancer, even in the early stages of the disease, according to a new study.

In the study, researchers found that the test could detect 10 types of cancer and that it was 80 to 90 percent accurate for some cancer types.

However, much more research is needed before doctors will be able to use the test on their patients, experts say. [10 Do's and Don'ts to Reduce Your Risk of Cancer]

"This is a very promising study," said Dr. Kazuaki Takabe, the Alfiero Foundation endowed chair in breast oncology at the Roswell Park Comprehensive Cancer Center in Buffalo, New York, who was not involved with the study. However, Takabe stressed that the work is very preliminary. "Clearly, this is just the beginning," Takabe said. "We need more and more and more samples" to determine the true accuracy of the test.

In addition, the study included patients who had already been diagnosed with cancer, so more studies are needed to investigate whether the test can detect cancer in its earliest stages, before people are typically diagnosed with the disease.

The study, led by researchers at the Cleveland Clinic Taussig Cancer Institute, will be presented June 4 at the annual meeting of the American Society of Clinical Oncology in Chicago.

The test, referred to as a "liquid biopsy," looks for small pieces of DNA that are released from cancer cells into the blood.

The new study analyzed blood samples from 878 people who were recently diagnosed with cancer and 749 people who did not have cancer. (Patients with cancer were diagnosed at various stages, from early, or stage 1, to fairly advanced, or stage 3.)

The test worked best for ovarian cancer, correctly detecting this cancer in 90 percent of patients who had it.

The test was less precise for lung, esophageal, and head and neck cancers, detecting these cancers with about 50 to 60 percent accuracy.

Takabe noted that although the study included more than 1,600 patients, the number of patients with some types of cancers was quite small — for example, only about 10 patients in the study had ovarian cancer — which is another limitation of the study.

There is a "huge interest" in developing liquid biopsy for cancer, Takabe told Live Science, because the tests could have the potential to catch cancer very early.

"The vast majority of medical practice is based upon chief complaint," meaning a patient's first report that's something's wrong, Takabe said, adding, "The excitement about these liquid biopsies is, can we screen people who have absolutely no symptoms, no complaints" but have something in their blood that could hint at cancer?

Some researchers have criticized the idea of liquid biopsies because it's unclear whether catching cancer very early would indeed prolong a person's life, Takabe noted.

However, developing technology to detect the disease very early would hopefully lead to the "discovery of measures that truly prolong life when those disease[s] are detected super early," he said.