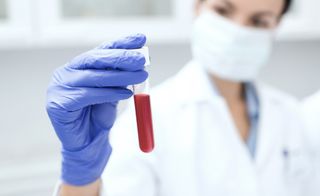 Researchers have developed a new blood test that can detect eight common types of cancer, including the notoriously elusive liver and pancreatic cancers. Some day, doctors may be able to use this method to spot cancers in their early stages — before the onset of symptoms —  thus improving patients' chances of successful treatment and survival.

The test, called CancerSEEK, looks for a number of compounds in the blood that are thought to be early signs of cancer. These include 16 different cancer "driver genes" — genes that are associated with tumors — and eight proteins, according to the study describing the test, which was published Jan. 18 in the journal Science.

"The sort of ultimate vision is that at the same time that you are getting your cholesterol checked when you are getting your annual physical, you will also get your blood screened for cancer," said lead study author Joshua Cohen, a medical and doctoral student at the Johns Hopkins University School of Medicine. [10 Do's and Don'ts to Reduce Your Risk of Cancer]

What's more, the test appears to be able to screen for five cancers for which screening tests aren't currently available: ovarian, stomach, esophageal, liver and pancreatic. These cancers typically don't cause symptoms until they reach more advanced stages of the disease, when treatment becomes difficult.

What differentiates the CancerSEEK test from previously developed so-called "liquid biopsy" tests — tests that look for markers of cancer in the blood — is the use of two types indicators (genes and proteins) to get more accurate results across a wider range of cancers, Cohen told Live Science.

The test uses an artificial-intelligence algorithm to analyze the combinations of genes and protein biomarkers found in the blood sample and identify which type of cancer the patient likely has, Cohen said. The tool could be particularly important for general practitioners, who could administer the test and then send their patient for additional testing to verify the result, he said.

For example, if the blood-test results suggest stomach cancer, a doctor could recommend the patient get an endoscopy to confirm the results, Cohen said. Similarly, test results pointing to colon cancer could lead to a colonoscopy.

To study how well the blood test worked, the researchers tried it on about 1,000 patients with known diagnoses of cancer that hadn't metastasized, or spread to other parts of the body. These cancers included breast, ovarian, stomach, liver, pancreatic, esophageal, colorectal and lung. The researchers also enrolled about 800 healthy patients without cancer to serve as a control group.

The test detected cancer with 69 to 98 percent accuracy, the study found. And the more advanced the cancer, the higher the accuracy.

But for cancers in an early stage — for example, stage one cancers — the test accurately detected cancer just 40 percent of the time. Independent experts see this relatively low figure as the major weakness of the test. [7 Cancers You Can Ward Off with Exercise]

"The sensitivity of the test in stage one cancer is quite low, about 40 percent," said Dr. Mangesh Thorat, deputy director of the Barts Clinical Trials Unit at the Center for Cancer Prevention at Queen Mary University of London. Thorat was not involved in the new study.

"Even with stage one and two combined, it appears to be around 60 percent," Thorat told Live Science. "So the test will still miss a large proportion of cancers at the stage where we want to diagnose them."

The blood test also detected cancer in 1 percent of the control group, according to the study. This could either mean that the test has a 1 percent false-positive rate (in other words, it falsely points to cancer 1 percent of the time) or that the individuals do in fact have cancer that has not yet been diagnosed, Cohen said.

"The test needs to be validated in a large-scale study that would evaluate tens of thousands of healthy individuals to confirm the sensitivity and specificity," Cohen said. "It's really important to confirm the results and demonstrate that this test would work in a real-world" setting.

Cohen said the researchers want to increase the sensitivity and accuracy of the test by including additional types of biomarkers.