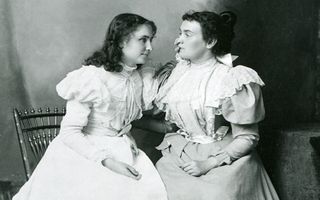 An image of Helen Keller with her teacher, Anne Sullivan, in 1897. Keller learned to "lip read" with her hands.
(Image: © PhotoQuest/Getty)

Helen Keller was just 19 months old in 1882 when she developed a mysterious illness that would rob her of her hearing and sight. Still, she would go on to learn to communicate through signs, as well as read, write and speak. Today, 50 years after her death on June 1, 1968, she is remembered for being an accomplished author and activist for people with disabilities, who persevered in the face of adversity.

But what exactly caused the illness that left her deaf and blind?

It turns out that, despite the famousness of Keller's case, no comprehensive medical analysis has been conducted, until now.

In the first analysis of its kind, a pediatric infectious-disease expert has concluded that a likely explanation for Keller's deaf-blindness was an infection with the bacterium Neisseria meningitidis that, in turn, caused meningitis, or a swelling of the linings that cover the brain and spinal cord.

It's important to note that doctors will never know for certain exactly what illness "closed my eyes and ears and plunged me into the unconsciousness of a new-born baby," as Keller later wrote. But the explanation of bacterial meningitis is "where reasonable deduction would take you," said Dr. Janet Gilsdorf, the author of the analysis and a professor emerita in the Department of Pediatrics at the University of Michigan Medical School. [10 Mysterious Deaths and Disappearances That Still Puzzle Historians]

Gilsdorf said she became interested in what caused Keller's deaf-blindness after she posed the question to her students during lectures about meningitis.

After one of those lectures, "I thought, what do we know about this? I grew very curious about it," Gilsdorf told Live Science.

But when Gilsdorf studied the literature, she "found nothing authoritative" on the topic. The explanations that did exist came from historians, not physicians or infectious-disease experts, and most of these ideas "were way off-base from a medical point of view," Gilsdorf said.

Keller's autobiography is also vague, saying that she developed a sudden fever, and doctors called the illness "acute congestion of the stomach and brain."

So Gilsdorf used a digital library database called the HathiTrust to review the literature on what was known at the time about infectious diseases that may have caused Keller's deaf-blindness, and what symptoms and complications patients developed in the age before antibiotics. Her analysis was published online May 5 in the journal Clinical Infectious Diseases.

What's more, scarlet fever was a known illness at the time, and "Helen Keller’s physician very likely would have recognized scarlet fever if it preceded meningitis," Gilsdorf wrote in her analysis.

Some historians have also attributed Keller's illness to rubella, which can cause deafness and blindness if babies are infected in the womb. If this happens, babies are born with these complications, but Keller was healthy before her illness, Gilsdorf said.

Keller may have also had a disease that caused encephalitis, or inflammation of the brain, but this likely would have caused severe brain damage and led to intellectual disability, which didn't happen in Keller's case, Gilsdorf noted.

However, an infection with Neisseria meningitidis that caused meningitis, known as meningococcal meningitis, seems to fit Keller's symptoms and complications. The survival rate of this form of meningitis at the time of Keller's illness was around 30 to 40 percent. People with this illness can recover suddenly, which would fit Keller's own description of her recovery; she stated in her autobiography that "the fever left me as suddenly and mysteriously as it had come." What's more, a 1913 report on 1,300 patients with this infection found that about 31 percent of patients survived, and that among survivors, 45 lost their hearing, three lost their vision and two lost both hearing and vision. This evidence suggests that meningococcal meningitis is "a credible cause of the illness that left Keller deaf and blind," Gilsdorf wrote.

But since other bacteria can also cause meningitis, could another microbe be to blame? There are two other types of bacteria aside from N. meningitidis that commonly cause meningitis. One is Streptococcus pneumoniae, but this infection was "uniformly fatal" at the time of Keller's illness, Gilsdorf said. Another is Haemophilus influenzae, which one study reported had a mortality rate of around 97 percent in young children at the time of Keller's illness, but could also cause deafness or blindness. Thus, although the survival rate was low, H. influenzae could also have possibly caused Keller's illness, Gilsdorf said.

Gilsdorf said she hopes her analysis inspires people to think critically and dig deeper into historical cases. She also hopes people continue to remember Helen Keller. "She was a great, great woman and highly accomplished despite all of her disabilities," Gilsdorf said.