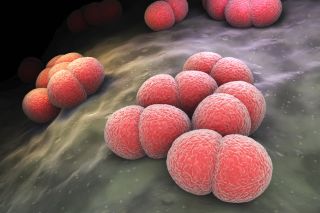 Neisseria meningitidis is a bacterium that can cause meningitis.
(Image: © Tatiana Shepeleva/Shutterstock)

In a rare case, a woman contracted a potentially deadly bacterial infection while on a 12-hour flight from Japan to Germany, according to a new report.

Called meningococcal disease, this bacterial infection is generally transmitted only through close contact, for example, by kissing or living in close quarters with someone who is sick, according to the World Health Organization. The new report is only the third case ever reported of this disease being transmitted on an airplane, said Yushi Hachisu, of the Chiba Prefectural Institute of Public Health in Chiba, Japan, who helped investigate the case.

Hachisu presented the case on Oct. 5 at IDWeek, an infectious disease conference in San Diego.

The woman and her husband, both in their 50s, were traveling from Japan to Germany on Aug. 8, 2015, according to the report. They happened to be on the same flight as a team of Scottish and Swedish scouts who were returning from the World Scout Jamboree, an international gathering of scouts ages 14 to 17. Six of the scouts later developed meningococcal disease in an outbreak that was linked to attendance at the jamboree. [27 Devastating Infectious Diseases]

The married couple did not sit directly next to the scouts, but sat in a row behind and across the aisle from the Scottish scouts. They noticed that one of the scouts seated in front of them was coughing throughout the flight, the report said.

They felt sick for the rest of their trip, but felt somewhat better upon their return to Japan on Aug. 16, the report said. However, on Sept. 19, the woman developed a sudden high fever and chills, as well as pain in her joints. She visited four health care facilities and underwent tests before she was finally hospitalized on Sept. 25.

Meningococcal disease is rare in Japan, with only about three cases per 10 million people, the researchers said.

The new report "strongly suggests that N. meningitidis was transmitted from the Scottish scouts to the Japanese couple during their international flight," the researchers wrote in their report.

Still, the overall risk of transmitting meningococcal disease on an airplane is low, Hachisu said. But it can happen — in 2005, officials in Australia reported cases of two people who got sick with N. meningitidis after traveling on a flight from Los Angeles to Sydney. Officials determined it was likely that one of the infected passengers spread the bacteria to the other passenger, or both of the infected individuals got the bacteria from another person on the flight who wasn't showing symptoms.

The U.S. Centers for Disease Control and Prevention recommends that passengers who sit next to someone with N. meningitidis on a flight that is more than 8 hours long receive preventive antibiotics. A longer flight increases the chance of transmission, Hachisu said.