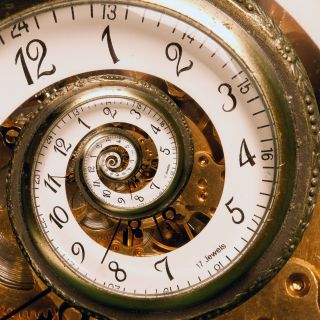 A lot can happen in a second; you could meet a stranger, snap your fingers, fall in love, fall asleep, sneeze. But what is a second, really — and is it as precise as we think it is?

Right now, the most-precise clocks used to tell global time have an error of about 1 second every 300 million years — so a clock that started ticking in the time of the dinosaurs wouldn't be off by even a second today. But scientists think we can do better. [The 18 Biggest Unsolved Mysteries in Physics]

So, they are looking to lutetium, a neglected rare-earth element that has been gathering dust at the bottom of the periodic table, according to a new study published April 25 in the journal Nature Communications.

Why is one second 1 second long?

In the olden days, a second was defined as a fraction (1/86400) of the average solar day, the 24-hour rotation of the Earth around its axis. But the rotation of the Earth can vary slightly, so scientists decided to stop scanning the heavens to calibrate our clocks and scaled things way down — to the level of atoms, the invisible building blocks of matter.

In 1967, the International Committee for Weights and Measures defined the second as the amount of time it takes for a cesium atom to absorb enough energy to be excited — that is, for its electrons to jump from one energy state to the next. For this to happen, the atom must be pulsed with exactly 9,192,631,770 cycles of microwave radiation.

Though that number might seem random, it comes from measuring the frequency of microwaves needed to excite the cesium atoms in the average of the earlier definition of 1 second. These measurements were taken over a span of nearly three years, Scientific American reported.

Currently, hundreds of cesium atomic clocks are responsible for keeping global time and controlling GPS navigation. But in the past decade, another generation of atomic clocks has emerged, called "optical clocks," and they are 100 times more precise than the cesium variety. The new clocks work in the exact same way as the cesium ones, except they use atoms such as aluminum or ytterbium that get excited by higher frequencies of visible light (hence the name "optical") rather than the slower microwaves. This higher frequency adds more data points to the definition of a "second," making the measurement more precise. [7 Strange Facts About Quarks]

To understand this, imagine the different types of clocks as a pair of rulers, said Murray Barrett, an associate physics professor at the National University of Singapore and the lead author of the new study. If the older, "cesium" ruler measures a line that's 20 centimeters (7.9 inches) long, the more precise, "optical" ruler can measure the line also as, for example, 200 millimeters.

While optical clocks are very precise , getting them to run for a very long period of time and to remain stable in their environments can be problematic, Barrett said. A room's temperature can change the electromagnetic fields acting on the atoms, which in turn can skew the time measurement, Barrett said. So, the cesium clocks are still "much more reliable in their implementation than [the new] optical clocks," Barrett told Live Science.

In their new study, Barrett and his team found that a lutetium ion is less sensitive to changes in environmental temperature than are any other elements used for optical clocks, making it a strong candidate to serve as master time keeper.

Lutetium atoms can also help compensate for another problem affecting time measurement, the team found. Because the atoms used in these clocks are charged, they slightly wiggle back and forth in response to the electromagnetic fields created by the waves (visible light, microwaves, etc.) — and this can skew the time measurement. Scientists call this rapid backward and forward movement a "micromotion shift."

Because scientists must compensate for this shift, it's really difficult to develop atomic clocks with more than one ion — which would make such clocks more practical, Barrett said. But the team found that they could use a natural property in a certain type of lutetium ion to cancel out these "micromotion shifts."

However, this comes at a cost: Those atoms became more sensitive to the temperature of the room. That trade-off might limit the impact of the new finding, and the atom lutetium might not be a "real game changer," said Jérôme Lodewyck, a physicist at the Paris Observatory who was not part of the study.

But, this "high-quality work" adds another possible atomic species to the long list of timekeeper candidates that is a "wealth for metrologists" looking to compare different clocks, Lodewyck said. [What's That? Your Physics Questions Answered]

Though Barrett said lutetium "is extremely promising," he doesn't think there's a big rush to redefine the second using optical clocks, as cesium clocks do just fine at things like getting us where we need to go.

But highly precise optical clocks might allow for new applications "that would simply not be possible with our current technology," Barrett said.

For example, clocks are sensitive to where they sit in the world, because time is distorted by gravity, according to Albert Einstein's theory of general relativity. Right now, atomic clocks on Earth can't detect the miniscule time-warping that occurs due to Earth's gravity.  But if researchers could place highly precise optical clocks around the world, that setup could help researchers map out the gravitational field of our planet, Barrett said.

Further, highly precise atomic clocks could detect matter and energy we may not yet be able to see, Lodewyck said. That could include dark matter, which exerts a gravitational pull yet does not interact with ordinary light, and dark energy, the mysterious force that seems to be accelerating the expansion of the universe, he said.

Here's how it might work: If you know the frequency needed to excite some atoms in the time frame of a second, you could use these various clocks around the world to detect any differences beyond what you would normally expect. There are "some theories that say dark matter is around us, so if we cross a chunk of dark matter, this would perturb the clock," Lodewyck told Live Science.

There may even be applications we can't think of right now, Barrett said. "Certainly, when we first started developing clocks for the purpose of ship navigation, we never imagined the idea of somebody being able to walk around and know exactly where they are in a big city."