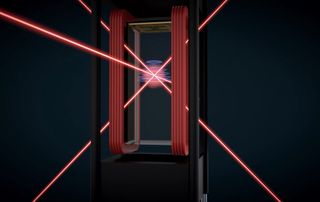 An illustration of the Cold Atom Lab aboard the International Space Station
(Image: © NASA/iGoal Animation)

NASA is poised to "freeze" atoms in their tracks with lasers, creating the coldest spot in the universe — less than one-billionth of a degree above absolute zero, the lowest possible temperature — on board the International Space Station (ISS).

The Cold Atom Laboratory (CAL) is a compact instrument about the size of a beer cooler, and it uses lasers to generate a super-cooled environment 10 billion times colder than the vacuum of space. It's so cold inside CAL that atoms become nearly motionless; CAL then uses magnets to trap the slowed atoms so that scientists can observe their movements and how they interact.

But even ultracold atoms succumb to the pull of gravity, so when CAL experiments were conducted on Earth, scientists could observe the slow-motion atoms for only a second at a time.

Today (May 21), NASA launched CAL into space on the Orbital ATK Cygnus spacecraft, bound for the ISS, NASA officials said in a statement. Once installed in a microgravity environment, CAL will remotely reveal slowed-down atoms to scientists for seconds longer than is possible on Earth, enabling them to better understand the atoms' quantum behavior. [Wacky Physics: The Coolest Little Particles in Nature]

"Results of this research could lead to a number of improved technologies, including sensors, quantum computers and atomic clocks used in spacecraft navigation," according to the NASA statement.

The vacuum of space is cold, about minus 455 degrees Fahrenheit (minus 270.55 degrees Celsius). But temperatures inside CAL will be even colder: nearly absolute zero (absolute zero is minus 459.67 degrees F, or minus 273.15 degrees C).

At that temperature, atoms slow down so much that they begin to enter the same quantum state, exhibiting the same amount of energy as one another, NASA representatives explained. Their behavior becomes more wavelike, and they start to synchronize like a line of dancers — a phenomenon known as a Bose-Einstein condensate (BEC).

And in the microgravity of the ISS, atoms are expected to retain this state of matter for up to 10 seconds, offering researchers the possibility of observing quantum behavior never seen before, according to a CAL mission description.

CAL can trap three types of atoms for scientists to study — rubidium and two isotopes of potassium — cooling them to near-immobility in seconds and holding them in magnetic traps for observation by scientists back on Earth.

Once CAL reaches the ISS and is installed, the astronauts' work will be done; CAL will then be operated remotely from the ground. Experiments will operate for up to 6.5 hours per day while the ISS crew is asleep, to minimize the disturbance to the space station's microgravity, NASA representatives reported.

Once the experiment is running, and if temperatures get as cold as expected, CAL will knock out the current record holder for the coldest place in the universe: the Boomerang Nebula, located 5,000 light-years away, which plunges to minus 458 degrees F (minus 272 degrees C).

Update at 10:54 am ET, August 1: The CAL has already produced its first results, cooling rubidium atoms to a Bose-Einstein condensate far colder than anything known to occur naturally in space, but not yet as cold as the coldest experiments on Earth.