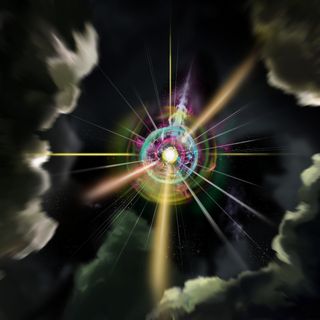 Bizarre magnetic behavior that was predicted by a famous physicist more than 80 years ago has finally been demonstrated in the lab, according to a new study.

The behavior of an electron in response to a magnetic monopole, or a solitary magnet with just a north pole, has been demonstrated in an ultra-cold material that mimics a natural magnetic system. And the monopole and electron system behaves just as English physicist Paul Dirac predicted it would in 1931.

Though the new experiment, described today (Jan. 29) in the journal Nature, doesn't prove that such monopoles exist outside the lab in other magnetic systems, it could help physicists know what to look for in nature, said study co-author David Hall, a physicist at Amherst College in Massachusetts. [Twisted Physics: 7 Mind-Blowing Experiments]

All known magnets have a north and south pole: Break a magnetic compass needle in two, for instance, and there will always be two smaller magnets with both poles.

"You can slice up your needle as much as you like and you can even get down to the atomic level, and you'll still have a north pole and a south pole," Hall told LiveScience.  Even electrons and protons have two poles.

This is a mystery because many physicists believe that a magnetic monopole — a magnet with just one pole — should exist. For instance, monopoles would explain why the electric charge of subatomic particles such as electrons and protons always come in discrete units of a fundamental charge, Hall said.

And if such magnetic monopoles exist, they likely formed just after the Big Bang when all of space was much hotter and denser than it is today; the conditions may have been energetic enough to form these bizarre magnetic particles, scientists have said.

In 1931, Dirac tried to imagine how this monopole could be consistent with the Standard Model, the reigning physics theory that describes the behavior of tiny particles.

He predicted that a magnetic monopole would leave a little whirlpool trail as it passed through an electron, with a blank corridor in the middle where the electron is completely absent, terminating in the magnetic monopole. (In quantum theory, electrons aren't solid masses with fixed boundaries, but rather fuzzy blobs that other objects can pass through.)

Unfortunately, scientists have searched in vain for natural monopoles, so it was difficult to test Dirac's theory.

To do so, Hall and his colleagues cooled rubidium atoms to just a billionth of a degree above absolute zero. At this temperature, the atoms display weird quantum behavior, essentially acting like a single wave instead of an aggregation of particles.

They used one rubidium atom to mimic an electron, and then created the magnetic field of a monopole by tweaking the alignment of millions of other rubidium atoms, each of which essentially acts like a tiny compass needle pointing in a slightly different way.

They then took pictures of the "electron" as it interacted with the "magnetic field."

Sure enough, as the synthetic monopole encountered the electron, it created a whirling vortex and a corridor region with no atoms that terminates at the center, just as Dirac predicted, Hall said.

The work "is a beautiful demonstration of quantum simulation, a growing field that uses real quantum systems to model others that are difficult to make, calculate, or observe," said Lindsay Leblanc, a physicist at the University of Alberta in Canada, who wrote a News & Views article about the new study in Nature.