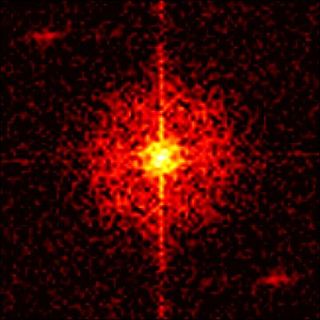 This experimentally imaged photo is the first to show Landau Level 1, a circular orbit for electrons inside a strong magnetic field.
(Image: © University of Warwick)

For the first time, scientists have peered down to the level of a single electron and observed quantum states that had only been theorized before.

Previously, scientists had confirmed the levels exist by measuring the changes in electric current that result when electrons switch from one Landau level to another. However, no one has been able to see these levels until now.

"We are the first to have actually done what's called scanning tunneling microscopy and really look at individual states," said physicist Rudolf Roemer of England's University of Warwick. Roemer was a member of the research team, led by Koichi Hashimoto of Japan's Tohoku University, that reported the achievement in a paper published in the Sept. 14 issue of the journal Physical Review Letters.

When charged particles, such as electrons, are put inside a magnetic field, they travel along curved paths, ultimately making a circle. As the magnetic field gets stronger and stronger, these circles get smaller and smaller. The smallest possible circles for the electrons to travel in are the Landau levels. [Tiny Grandeur: Stunning Photos of the Very Small]

To image these levels, the physicists looked at electrons on the surface of a semiconductor material. Then they used scanning tunneling spectroscopy to look for the possible locations of electrons.

This technique images a sample by allowing electrons to try to pass into it at different locations. If the location contains a feasible state for an electron, the particle will be able to jump into that state through a process called tunneling, confirming that it exists; if the location does not hold a potential electron state, there's nowhere for the electron to tunnel into. In the resulting image, light areas represent the locations of possible states, while black spots show the lack of electron states.

The pictures produced by Hashimoto and his team look remarkably like theoretical simulations predicted they would.

"I was very much hoping it would come out like that, and of course we were surprised the agreement was so good," Roemer told LiveScience. "The agreement is even quantitatively so good."

Such images were never possible to make before because scanning tunneling spectroscopy has never been so advanced. Each pixel in the team's pictures represents more than a half-hour of data taking, Roemer said.

And Landau levels aren't just an esoteric curio. They could be put into practical use to help redefine the kilogram, the fundamental unit of mass in the International System of Units (SI). While most SI units are defined by relations between fundamental constants that can be reproduced anywhere to derive the correct value, the kilogram is currently defined by a golf ball-size lump of metal kept in a vault in France.

Scientists want to change that by defining the kilogram in terms of the weight it would take to counterbalance an electromagnetic force produced by a magnetic coil. The strength of this force is partly dependent on the von Klitzing constant, which is itself linked to Landau levels.

"Imaging Landau levels doesn't help set up the balance, but it strengthens the understanding of the underlying theory we have, that the von Klitzing constant is a universal constant, and it tells us it's really true," Roemer said. "We can look at these states and really find them there."