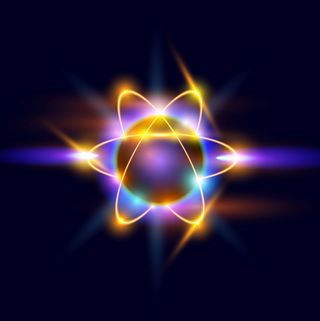 Electrons bound to an atom can sometimes escape, even if they lack the requisite energy, through a phenomenon known as quantum tunneling.
(Image: © Dreamstime)

Sometimes, particles can pass through walls.

Though it sounds like science fiction, the phenomenon is well documented and even understood under the bizarre rules that govern the microscopic world called quantum mechanics.

Now, scientists have measured the timing of this passing-through-walls trick more accurately than ever before, and report their results in today's (May 17) issue of the journal Nature.

The process is called quantum tunneling, and occurs when a particle passes through a barrier that it seemingly shouldn't be able to. In this case, scientists measured electrons escaping from atoms without having the necessary energy to do so. In the normal world around us, this would be like a child jumping into the air, and somehow clearing a whole house. [Graphic: Nature's Tiniest Particles Explained]

Quantum tunneling is possible because of the wave-nature of matter. Confounding as it sounds, in the quantum world, particles often act likes waves of water rather than billiard balls. This means that an electron doesn't exist in a single place at a single time and with a single energy, but rather as a wave of probabilities.

"Electrons are described by wave functions that extend smoothly from the inside to the outside of atoms — part of the electron is always out­side the atom," explains physicist Manfred Lein of Leibniz Universität Hannover in Germany in an accompanying essay in the same issue of Nature.

Now, physicists led by Dror Shafir of Israel's Weizmann Institute of Science have prompted electrons to tunnel out of atoms, and measured when they do so to within 200 attoseconds (an attosecond is 10-18 seconds, or 0.000000000000000001 seconds).

The researchers used a laser light to suppress the energy barrier that would normally trap an electron inside a helium atom. This laser reduced the strength of the barrier just enough so that an electron wouldn't have the energy required to escape the atom, but it could cheat and tunnel its way through. (The laser also nudges the electron back to its parent atom after it tunnels out.)

To measure this, the physicists looked for the photon of light produced when an electron rejoined the atom after tunneling through. In some instances, the scientists used a laser to kick the electron away, preventing it from recombining with the atom.

"It's a time-dependent kick," Dudovich told LiveScience. "It eventually tells us something about the point where the electron was set free. The outcome is that tunneling occurs in less than a few hundred attoseconds."

This is the first time scientists have been able to pinpoint when an electron has tunneled through an atom. Previously, theoretical calculations had predicted the timing of quantum tunneling, but never before has it been directly measured with this accuracy.

The findings could help scientists understand other super-fast processes that rely on quantum tunneling.

"We know this phenomenon initiates many fast processes, which are very basic in nature," Dudovich said. "So we can think of this as we really measured the first step in many processes in nature."