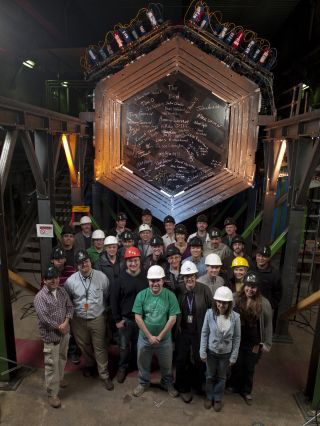 For the first time, scientists have used neutrinos – the exotic fundamental particles that routinely pass right through Earth – to send a message through the ground.

Researchers have long been intrigued by the communication possibilities of neutrinos, because these particles can easily travel through matter, including a planet, without stopping, slowing down or being misdirected.

Neutrinos are extremely tiny particles with almost zero mass and neutral charge. Thus they are impervious to electromagnetic forces and respond very weakly to gravity. They almost never collide with other particles, generally passing straight through the atoms that make up matter.

Now, scientists have successfully harnessed neutrinos to send a message from one place to another, spelling out the word "neutrino" in a particle binary code. [Nature's Tiniest Particles Dissected (Infographic)]

The researchers used the NuMI particle accelerator at the Fermi National Accelerator Laboratory in Batavia, Ill., to create beams of neutrinos, which result when speeding protons collide into a wall of carbon atoms. (NuMI stands for "Neutrinos at the Main Injector.")

The scientists then sent this beam toward a neutrino detector about 1 kilometer (0.6 miles) away, buried in a cavern.

Because neutrinos so rarely interact with other particles, they are extremely difficult to detect. The detector, called Minerva, contains layers of different materials, including carbon, lead and iron. As the neutrinos pass through it, occasionally a neutrino will collide head-on with the nucleus of one of these atoms, creating other particles that are visible to the detector.

"The likelihood of that occurring is very small, but if you have a big enough mass in the detector it will occur frequently enough to get a signal," said study leader Dan Stancil, an electrical engineer at North Carolina State University. "One in every 10 billion neutrinos creates an event."

To send their message, the researchers turned their neutrino beam on and off in the fashion of a binary system of 1s and 0s used by computers to encapsulate information.

The results are reported in a paper submitted to the journal Modern Physics Letters A.

Though it's just a first step, Stancil says the technique eventually could be useful in situations where normal methods of sending communications don't work.

For instance, Stancil told LiveScience, "it's really almost impossible and impractical to communicate with a submarine when they're at depth. The seawater has some electrical conductivity, and as a result radio waves don't penetrate very deeply. So I believe that having some way of getting messages through would be of interest."

The molecules in the water around a submarine potentially could serve well as a neutrino detector. Because creating neutrinos currently requires a powerful particle accelerator, the sub would be able only to receive messages, not send them.

Stancil also said a neutrino communications device could be useful as a backup during a catastrophe that destroyed existing infrastructure.

"In principle, you could have straight-line communication right through the center of the Earth, without satellites or cables," Stancil said. "I can imagine there could be certain strategic situations where that could be very valuable."

However, neutrino communication is a long way from being practical, the scientist said. In addition to requiring particle accelerators, such systems would be hampered by the fact that the signal intensity decreases with distance, so much denser beams than are currently available would be needed to send a message very far. And neutrino detectors themselves are complex affairs that would need to be simplified to make a usable communication device.

"Of course, our current technology takes massive amounts of high-tech equipment to communicate a message using neutrinos, so this isn't practical now," Kevin McFarland, a University of Rochester physics professor who worked on the project, said in a statement. "But the first step toward someday using neutrinos for communication in a practical application is a demonstration using today's technology."

This isn't the first time neutrinos have made news lately.

A team of physicists at the CERN laboratory in Geneva, Switzerland, reported last year that they'd seen neutrinos apparently traveling faster than light. The controversial finding stood to disprove one of the most successful theories of physics, Einstein's general theory of relativity, which states that nothing can move faster than the speed of light.

Because of the weird relationship of space and time, objects that could break this cosmic speed limit would have to travel backward through time, according to the theory. So if neutrinos are that speedy, they may also be time travelers, physicists have suggested. [10 Implications of Faster-Than-Light Neutrinos]

And if neutrinos can travel faster than light, that means a neutrino communications system could potentially send messages back in time.

However, most experts think the CERN results were an anomaly caused by an error in analysis or the experimental setup.

"The latest sense is the neutrinos did not in fact go faster than light," Stancil said. "Certainly we'd have to think through the implications for communications, but I don't anticipate that anything like that would be possible."