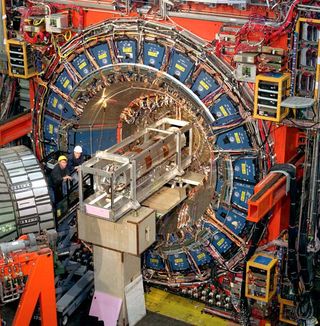 The CDF detector, about the size of a three-story house, weighs about 6,000 tons. It recrods the "debris" emerging from each high-energy proton-antiproton collision produced by the Tevatron.
(Image: © Fermilab)

One of the world's most powerful atom smashers, the Tevatron, shut down Friday (Sept. 30), with the event streaming live online.

The atom smasher is located at the Fermilab physics laboratory in Batavia, Ill. Inside the accelerator, particles are ramped up to near light speed as they zip around a 4-mile (6.3-kilometer) ring. When two particles collide, they disintegrate into other exotic particles in a powerful outpouring of energy.

While it was once the most powerful atom smasher, the Tevatron has recently been surpassed by the new Large Hadron Collider at CERN in Geneva, Switzerland. The Tevatron is shutting down for budget reasons. [Twisted Physics: 7 Mind-Blowing Findings]

Tevatron's end came a little after 3:30 p.m. ET, as Fermilab physicist Helen Edwards pushed two specially-constructed buttons, one red and one blue. The red button shut down the collision of protons and anti-protons in the Tevatron. The blue button shut off the electrical current to the accelerator.

That one, Edwards had to push twice.

"It didn't want to give up so easy," said Bob Mau, the head of the accelerator division operation department at Fermilab, who was leading the live-streamed shut-down.

The Tevatron was most recently in the news in April when a report suggested the accelerator's Collider Detector at Fermilab (CDF) experiment may have detected a never-seen-before subatomic particle. However, that tantalizing signal was found with an independent test to be a fluke.

Even so, the Tevatron is not without its share of big fundamental discoveries. The particle accelerator played a part in some major physics finds, such as reporting the existence of the top quark and five baryons. The baryon discovery helped scientists test and refine the Standard Model of particle physics and shape our understanding of matter, energy, space and time.

The experiments at Tevatron have also helped narrow down the search for the elusive Higgs Boson, or "god particle." LHC physicists are on the hunt for that particle.

Officials said those involved with the two detector experiments, CDF and DZero, will continue to analyze already collected data and expect to detail those results in scientific papers. These projects have aimed to understand and identify the origin of mass, extra dimensions of space and new particles.

In addition, Fermilab officials say they will continue to operate most of the 10 particle accelerators on site to generate particle beams for experiments involving protons, neutrinos and muons.

The mood today, however, was nostalgic.

"For many of us, CDF is more than a machine," said CDF scientist Ben Kilminster as he and his team shut down their detector. "It's a living creature that has the superhuman ability to see the microscopic quantum world. So it's going to be with heavy hearts that many of us watch it close its eyes to this world that has captivated us for so long."