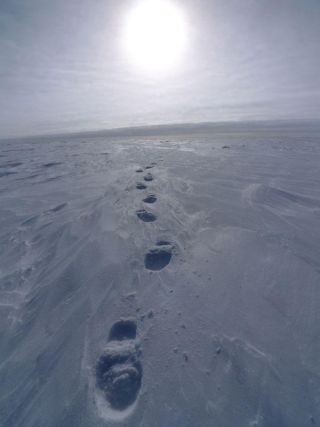 The coolest place in the Universe is nearly at absolute zero.
(Image: © International Falls Chamber of Commerce/Pete Schultz)

Despite what hipsters may tell you, Brooklyn's Williamsburg neighborhood isn't actually the coolest place in the universe. Rather, that honor could go to one of two spots: a nebula in space or a lab at MIT.

Either way, you'd better grab your jacket, because these places are really, really, insanely cold.

The Boomerang Nebula, which is an interstellar mashup of dust and ionized gases, plunges to a jaw-dropping temperature of minus 458 degrees Fahrenheit (minus 272 degrees Celsius), or just a degree Celsius above absolute zero, as measured by astronomers using the Atacama Large Millimeter-submillimeter Array (ALMA) in Chile in 2013. [Haunting Photos: The Spookiest Nebulas in Space]

Located 5,000 light-years away, this young planetary nebula has a morbid creator: a dying star at its center. Over time, stars on the less-hefty end of the mass scale — about eight times the mass of the sun or less — become so-called red giants.

Here's how this type of star's life span goes: As the star burns through its supply of hydrogen in its core, fusing it into helium, its luminosity actually increases. That's because the star can't generate enough heat to support its own weight, so the remaining hydrogen starts to get compressed in layers on the outside of the core. This compression generates more energy, but the result is that the star gets puffier as the gases in its outer layers expand. So, even though the star is more luminous, its gases cool, and the star looks redder. Red giants are big; when the sun turns into one, its surface will extend to Earth's current orbit.

Eventually, the giant burns through its hydrogen completely. More massive red giants will then start fusing the helium into heavier elements, but that process has limits too, and that's when the central layers of the star collapse. At that point, the star turns into a white dwarf, which is basically the burned-out, superdense core of the star. As the collapse happens, the outer layers of the star get left behind, because the red giant is so large that its grip on its outer layers is tenuous. The light from the white dwarf star illuminates the gas, and the result for Earthlings is a gorgeous planetary nebula. (The name is a misnomer, dating from the first sightings in the 18th century, but it stuck.)

That gas expands very rapidly, moving outward at speeds upward of about 363,600 mph (585,000 km/h). And this is why the nebula is so cold — even colder than the cosmic background radiation left over from the Big Bang (which is about minus 454.7 degrees F, or 2.76 kelvins). [The Big Bang to Civilization: 10 Amazing Origin Events]

As gases expand, they get cooler. This happens because expansion causes pressure to drop, and a decrease in pressure slows gas molecules down. (Temperature is basically a measurement of how quickly molecules are moving. The faster the molecules, the hotter the gas.)

You can observe the same phenomenon when you use an air can to clean a computer: The can of air gets colder when you spray, because the pressure on the gas inside is decreasing rapidly. Some of the energy to make the gas expand gets taken from the heat energy in the aerosol can. Because the gases in the Boomerang Nebula were thrown off by the central star at such a great speed, a lot of heat energy got zapped away in the blink of an eye.

Raghvendra Sahai, of NASA's Jet Propulsion Laboratory (JPL), in Pasadena, California, thinks the Boomerang Nebula is even colder than other expanding nebulas because it's throwing off its mass about 100 times faster than those dying stars, or about 100 billion times faster than the sun ejects mass.

But what about chilly places on Earth?

Students at MIT will be happy to know that their school is — so far — the coolest. In 2015, a team of physicists there chilled atoms to the coldest temperature ever: 500 nanokelvins, or 0.0000005 kelvins (minus 459.67 F or minus 273.15 C). That's a lot colder than the Boomerang Nebula, but only because the scientists used lasers to cool individual atoms of sodium and potassium.