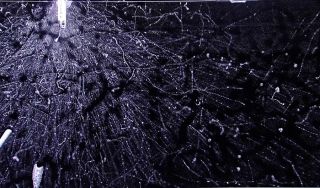 (Inside Science) — Exactly how long a neutron lives is currently under debate. Now researchers suggest this mystery could be solved if neutrons sometimes decay into particles of dark matter, the invisible substance thought to make up more than four-fifths of all matter in the universe. A flurry of research is now putting this notion to the test.

Along with the proton and electron, the neutron makes up most of the visible universe. Without neutrons, complex atomic nuclei simply could not be stable.

But once outside an atomic nucleus, a neutron would decay into a proton, an electron and a neutrino after 15 minutes on average, according to existing data. Although the neutron was discovered more than 80 years ago, the precise value for its average lifetime remains an open question.

There are two different ways to probe the lifetime of neutrons. In one, scientists place ultracold neutrons in a bottle and see how many are left after a certain amount of time. In the other, researchers analyze beams of neutrons to see how many decay into protons over a given space and time.

Oddly, beam experiments suggest the neutron's average lifetime is about 888 seconds, roughly 9 seconds longer than what bottle experiments do. "When the lifetime of the neutron is measured by two different approaches, and the results differ, we have a crisis -- is our basic understanding of the laws of physics wrong?" said study senior author Benjamín Grinstein, chair of physics at the University of California, San Diego.

After decades of fine-tuning both experimental approaches, physicists "have found no reason to suspect the discrepancy arises from bad measurements," Grinstein said. "We are left with the very real option that we need to consider changing the laws of physics in a fundamental way."

The researchers now suggest that about 1 percent of the time that neutrons decay, along with breaking down into a few known particles, they also produce dark matter particles. This may help explain one of the greatest mysteries in science.

The existence of dark matter particles was proposed to help explain a variety of cosmic puzzles, such as why galaxies can spin as fast as they are seen to without getting ripped apart. Scientists have largely ruled out all known ordinary materials as candidates for dark matter -- if it exists, the consensus so far is that it is made up of new species of particles that would interact only very weakly with ordinary matter.

Since beam experiments are focused on neutrons decaying into protons, they could not account for the possible mode of decay that produces dark matter particles, and thus they give a different lifetime for the neutron than bottle experiments do.

"It would be truly amazing if the good old neutron turned out to be the particle enabling us to probe the dark matter sector of the universe," said study lead author Bartosz Fornal, a theoretical physicist at the University of California, San Diego. Fornal and Grinstein detailed their findings online May 9 in the journal Physical Review Letters.

The physicists explored several different scenarios of "dark decay" for neutrons, where the neutrons would break down into both dark matter particles and ordinary components such as gamma rays or electrons. "Our proposed new particles are dark in that, like dark matter, they interact feebly with normal matter," Grinstein said.

Fornal and Grinstein's work has so far inspired roughly a dozen studiesexamining its implications. For instance, nuclear physicist Christopher Morris at Los Alamos National Laboratory in New Mexico and his colleagues searched for gamma rays from a bottle of ultracold neutrons, but couldn't detect anything within the window their instruments could observe.

Another set of tests of this idea has focused on neutron stars, which are superdense clusters of neutrons that can form when giant stars die.

Theoretical particle physicist Jessie Shelton at the University of Illinois at Urbana-Champaign and her colleagues noted that neutron stars do not cave in to form black holes because their gravitational fields are not powerful enough to crush neutrons. However, if neutrons can decay into dark matter, it may cause neutron stars with sufficient mass to collapse due to their own gravity. This would mean that neutron stars with 70 percent of the sun's mass could collapse into black holes, which is much lighter than previous estimates.

However, Shelton noted that if neutrons can indeed decay into dark matter, they will not give rise to just one kind of particle, but to at least two, and interactions between these new particles might prevent larger neutron stars from collapsing into black holes. "What we see from neutron stars suggests that neutrons decay either into no dark matter particles, or at least two," Shelton said. "Maybe the dark sector of our universe is more rich than we thought."

But future experiments may prove that the neutron lifetime anomaly has nothing to do with dark matter at all, Fornal and Grinstein conceded. A highly precise experiment to analyze neutron properties, such as Perkeo IIIat the Institut Laue-Langevin in Grenoble, France, "seems to be capable of deciding the viability of exotic neutron dark decays," said theoretical physicist William Marciano at Brookhaven National Laboratory in Upton, New York, an avenue he and his colleagues explored in a study appearing online May 16 in Physical Review Letters.

Another possible test involves examining neutron decay in atomic nuclei. Nuclear physicist Marek Pfutzner at the University of Warsaw in Poland said an experiment scheduled for this summer at the ISOLDE radioactive nuclei beam facility in Geneva will try to observe protons emitted as beryllium-11 decays.

"If we see enough of them, we will strongly reduce the room for dark decay. If we do not see them, the excitement will grow," said Pfutzner.

Inside Science News Service is supported by the American Institute of Physics. Charles Q. Choi is a science reporter who has written for Scientific American, The New York Times, Wired, Science, Nature, and National Geographic News, among others.