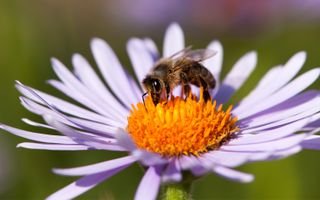 New regulations in the EU will protect bees from harmful pesticides.
(Image: © Shutterstock)

Countries in the European Union (EU) announced today (April 27) their support for a proposal to ban the outdoor use of neonicotinoids, widely used pesticides that have been linked to declines in pollinators — especially bees.

Their decision tightens restrictions on this group of pesticides enacted in 2013, and follows the publication of research earlier this year finding that three neonicotinoid compounds — imidacloprid, clothianidin and thiamethoxam — are harmful to bees, according to a statement released by the European Commission, the branch of the EU that proposes and enforces legislation and policies.

In the U.S., the Environmental Protection Agency (EPA) is currently assessing risks posed by these and other neonicotinoids, with a proposed interim decision to be issued later this year, EPA representatives noted on the department's website. [In Photos: The World's Most Efficient Pollinators]

Neonicotinoid pesticides, also known as "neonics," get their name from their chemical similarity to nicotine. First approved for use in the EU in 2005, neonicotinoids are highly toxic to insects and other invertebrates — far more so than to mammals, birds or reptiles — and they affect insects by targeting their central nervous system, paralyzing and then killing them, according to the EC.

But in 2013, the European Food Safety Authority (EFSA) determined that neonics were particularly harmful to bees, and so the compounds were limited and used only for certain types of crops that weren't likely to attract pollinators. Then, in 2015, an analysis of 588 new studies revealed that both wild bees and managed honeybee populations were at risk from neonics, which were found to affect bee reproduction and to interfere with their ability to navigate, Science recently reported.

A new assessment in February 2018 dealt what might be the fatal blow to neonic use in the EU. Based on a survey of 1,500 studies, the EFSA determined that the three neonics that were already partially banned left a toxic residue in the crop plants' pollen and nectar, meaning they still posed "a high risk" to bees, according to Nature. Meanwhile, additional evidence suggested that neonics could also accumulate in soil, affecting crops — and the bees that rely on them — for generations, Nature reported.

"Bee health remains of paramount importance for me since it concerns biodiversity, food production and the environment," Vytenis Andriukaitis, the EC commissioner for health and food safety, said in the EC statement.

By the end of 2018, the new EU regulation will prohibit all outdoor use of the three neonic substances, and their use will be permitted only in greenhouses "where no contact with bees is expected," EC representatives said in the statement.

Regulations to enact the new ban are anticipated in the coming weeks, according to the statement. However, there may be legal hurdles to overcome before the new ban can go into effect, Reuters reported. Two manufacturers of the neonicotinoids mentioned by the ban — Bayer CropScience, which developed imidacloprid, and Syngenta, developer of thiamethoxam — filed legal challenges to the earlier, partial ban, for which a verdict is anticipated on May 17.