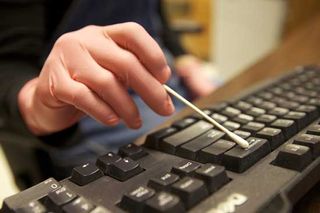 A new technique developed at CU‑Boulder to identify individuals by the unique communities of hand bacteria they leave behind on objects they have handled may prove to be a valuable forensic tool in the future.
(Image: © Steve Miller, CIRES)

CSIs may one day be able to use more than DNA and fingerprints to catch criminals, as a new study finds that the bacteria that live on our hands are just as unique to each of us as our DNA. And traces of this "personal" DNA left behind on the surfaces we touch can be matched to the person who left it.

Previous research by Noah Fierer of the University of Colorado at Boulder and his colleagues had found that a typical human hand carries about 150 bacterial species and that only about 13 percent of the bacterial species found on any one hand are shared between two people.

"The obvious question then was whether we could identify objects that have been touched by particular individuals," Fierer said.

Fierer and his team set out to test this idea by trying to match the bacteria found on people's palms and fingers with those left behind on their respective computer keyboards and mouses.

For the second test, the team swabbed nine computer mouses that hadn't been touched in more than 12 hours and compared the swabs with those taken from the palms of the computer owners. They compared the similarity of these two samples with 270 random samples from palms that had never touched the mouses. Again, the computer owner swabs matched much more closely to what was found on each computer mouse than did the random samples.

In a third test, the team also found that bacterial colonies swabbed from a person's skin and left at room temperature persisted for two weeks, pointing to the potential usefulness of "personal" bacteria as a forensic tool.

"Each one of us leaves a unique trail of bugs behind as we travel through our daily lives," Fierer said. "While this project is still in its preliminary stages, it could provide a way for forensics experts to independently confirm the accuracy of DNA and fingerprint analyses."

The new technique, described in the March 15 issue of the journal Proceedings of the National Academy of Sciences, could particularly prove useful as it is often difficult to obtain sufficient human DNA for forensic identification without the presence of blood, semen or saliva on an object. Bacterial DNA could also be useful in cases where clear fingerprints can't be lifted, though more research is needed to figure out how well skin bacteria sticks to different types of surfaces.

The technique could even be useful for distinguishing between identical twins, who share the same DNA, but still have different bacterial communities on their hands.

And criminals beware: Washing your hands won't get you off the hook. Fierer's previous work has shown that bacterial communities on the hand rebound within hours after hand washing.